Rajo Verma is a wife of five brothers. Their large family lives in the small town of Dehradun in northern India and together, they raise a son, but no one knows for sure who his biological father is. This is a classic example of a so-called polyandrous family. And we’re not talking about the Middle Ages — this way of living exists today! Recent studies have shown that about 50 societies from Tibet, Nepal, China, and India practice this type of relationship.

We at The Elite Indian have collected facts about polyandrous families and can’t wait to tell you about them.

1. Who serves as the head of a polyandrous family. You’ve probably heard of polygamy, where a man is married to several women at once. But what if everything was the other way around with one woman being married to multiple men? In this case, we call it a polyandrous family.

What makes this story even more amazing is the fact that most often, the husbands are brothers. The eldest is the head of the family. It is he who chooses a bride for himself and the others. And he has one more peculiar choice: the opportunity to take on a second or even third wife for himself. Moreover, it’s he whom all the children in the family consider to be their father. They call the other brothers “uncle” regardless of who their biological father is. No one knows why polyandry initially appeared. But scientists consider economic reasons to likely have been the cause. By creating a single family, the brothers wouldn’t have to split their inherited land with each other. This was a huge plus for people living in Tibet and the Himalayas since their soil was scarce or for those in India who suffered from overpopulation. While this type of relationship is convenient for some families, polyandrous marriages are not legalized around the world. At the same time, they seemingly go unpunished and it’s somewhat expected in rural areas of Tibet and some other places.

4. One wife and 5 husbands is considered a single family. Polyandry existed centuries ago. This means that parents, grandparents, and great-grandparents of people who live this way today led the same lifestyle years and years ago.

A woman usually has anywhere from 2 to 5 husbands and all of them are at least 18 years old. If there are brothers in the family who aren’t 18 yet, as soon as they reach the minimum age, they’ll also marry her.

These are far from the richest people. Most often, the whole family will live in a single room. When the men go to work, the wife is home cooking, cleaning, and looking after the children. At night, they sleep right on the floor which is covered with blankets since Tibetan village houses don’t always have beds. 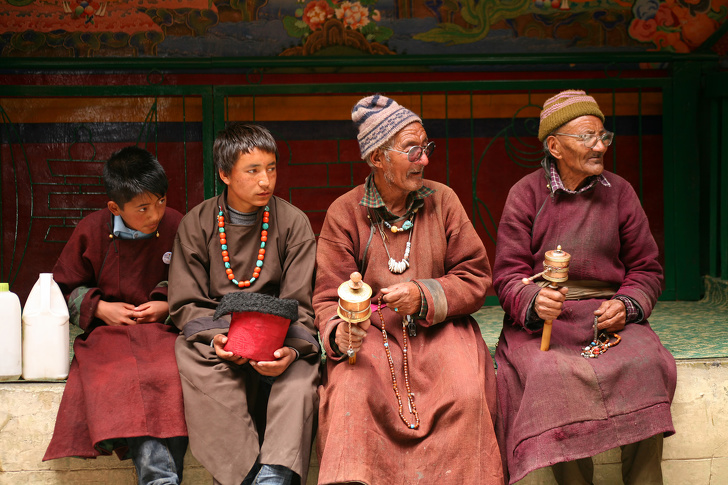 Polyandrous families live in communities of about 15 neighbors. They communicate often and are always ready to help each other when needed. But each family is independent, sets its own internal rules, and has its own way of distributing responsibilities among relatives. In some of the families, this happens very untraditionally. For example, a woman can choose to make money while the men do household chores.

Please share your feelings about polyandry with us. Do you think that such relationships can make the lives of Tibetan people easier?