It seems that celebrities don’t worry about their appearance. But in fact, they are people exactly like us, with their own problems and flaws. Many celebrities hide their imperfections or try to do a lot of different things to get rid of them. And some of them have turned their flaws into their “thing” or they just don’t care about them.

We at The Elite Indian are convinced that not all flaws should be hidden and most of them don’t even deserve our attention. But we still decided to have a look at what some celebrities would look like without their imperfections. Few people actually notice that Whoopi Goldberg doesn’t have eyebrows at all. It is said that in her youth, she plucked them too often, she went too far, and the hair just stopped growing. Then, the actress decided to fully get rid of them for good. But this didn’t stop her from winning all the biggest awards: Oscar, Grammy, Tony, Emmy, BAFTA, 2 Golden Globes, and her star on the Hollywood Walk of Fame. And everyone is used to seeing Goldberg without eyebrows. The scar on Jason Momoa’s eyebrow looks like an element of the actor’s style. He got it in a bar fight when he was attacked by another bar patron and hit with a broken bottle. Jason had to get 140 stitches and there was a risk that he would be blind in his left eye. But it ended well and this defect made the actor even more charming. 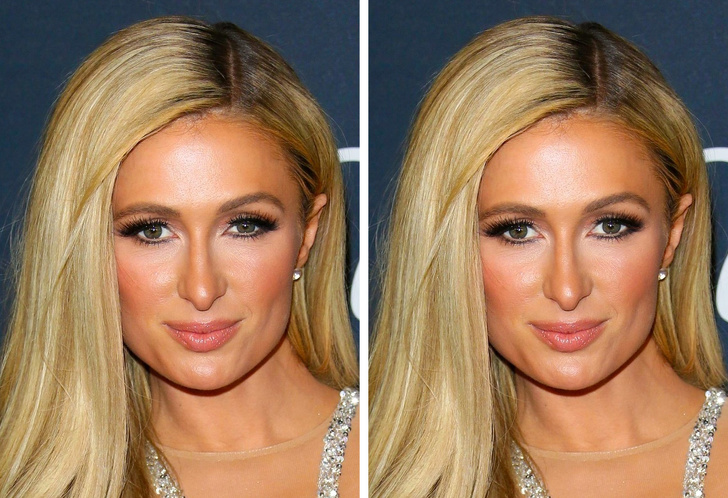 Paris Hilton has an obvious appearance flaw — a drooping eyelid. So, her left eye looks significantly smaller than her right one. She has learned to hide this flaw with the right makeup. Without this, she wouldn’t be as charming as she is. And it is hardly a flaw, because she regularly appears on the lists of the sexiest women in the world. Scarlett Johansson thinks that her face is “too long.” This is obviously an exaggeration. She has been on the lists of the most attractive women countless times. Do you agree that she looks far better on the left photo? Laetitia Casta proved that you don’t need to be perfect to be very successful. She turned her crooked teeth into her thing and she is not planning to have them changed. Her smile is great no matter what teeth she has. The scars on Seal’s face don’t make him feel uncomfortable at all. He actually thinks that they make him special, despite the fact that he was really ashamed of them in his youth. He got them because of an illness — systemic lupus erythematosus. But this flaw didn’t stop Seal from creating a successful career and marrying Heidi Klum. If he didn’t have the scars, he would look very ordinary. When she was in school, Linda Evangelista had the nickname “shovel” because of her peculiar-shaped nose. Of course, she was very worried about it, but it didn’t stop her from becoming a very famous supermodel and her nose is very unique. Kristen Stewart doesn’t like her ears and this is why she’s refused to have short hair that would reveal them. Stewart became world-famous, she was named the best actress of the decade, and now she is totally okay with having short hair. And her ears only make her even more charming, in our opinion. Kate Bosworth is not ashamed of her heterochromia — which is when you have eyes that are 2 different colors. She thinks that this is something that is cool and unique about her. But we were still interested in seeing what she would look like if her eyes were the same color. Before becoming very popular, the pop-star was actively fighting with extra weight and some other “flaws.” For example, the singer has quite a big nose. Lady Gaga denies having had any plastic surgeries, but now her nose seems to be a bit smaller. Maybe she just has a really good professional makeup artist. But still, she became world-famous with her little imperfections. We think that her nose looks great on her face and there is absolutely no need to make it look smaller. Marilyn Monroe had a light type of strabismus, a condition in which your eyes don’t properly line up, which is why she got turned down by so many directors at the beginning of her career. But the actress wasn’t going to change anything and just used the right makeup to make her eyes even more expressive and her look even more charming.

Do you think that celebrities should be perfect and do everything they can to fix or get rid of their flaws? Would you like to change something about yourself?