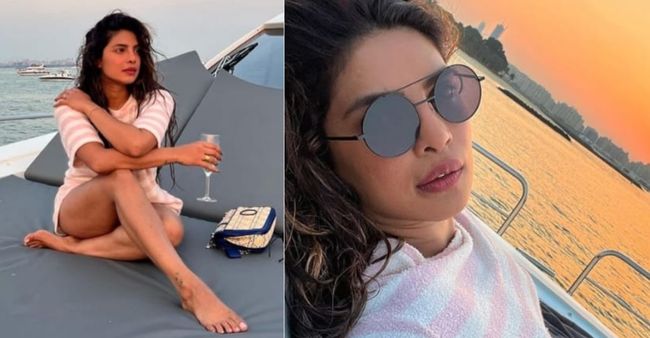 Actress Priyanka Chopra is turning up the winter temperature with her latest Instagram post. On Sunday, the actress took to her official Instagram handle and dropped a couple of pictures along with videos to reveal that she spent the weekend unwinding in Dubai. The caption of her post read: “Weekend Vibes.”

In the first picture, the Citadel star was seen laying on the floor of the boat while enjoying the waves and sun. In the second picture, she was seen wearing a casual white and pink outfit with a drink in her hand. In one of the pictures, PeeCee took a selfie with the sunset. Also, she shared a couple of videos in which she was seen riding a water scooter like a pro.

The actress turned heads at the Red Sea Film Festival. On the first day of the film festival, she wore a shimmering beige gown and on the second day, she donned a yellow satin gown. Meanwhile, on the work front, the actress was last seen in Matrix 4. Next, she will be seen in the web series Citadel. Besides this, she has Ending Things and Love Again in her kitty. Also, the actress will be making her Bollywood debut with Farhan Akhtar’s Jee Le Zaraa with Alia Bhatt and Katrina Kaif.