My husband and I have been dreaming about getting a Maine Coon cat for 10 years but we only dared to get one when we got our own apartment and already had kids. That’s how a 3-month old Maine Coon, who we call Moose, started to live with us. Since that time I have heard a lot of warnings that he would eat us up, as well as plenty of questions about why he is so small — other Maine Coons can grow to the size of a lynx.

Now Moose is 10 months old and we have completely gotten used to living with each other. Within this time, I have checked into all of the myths about Maine Coons and feel eager to tell The Elite Indian readers all the truths and lies about this breed.

They are actually not that big. 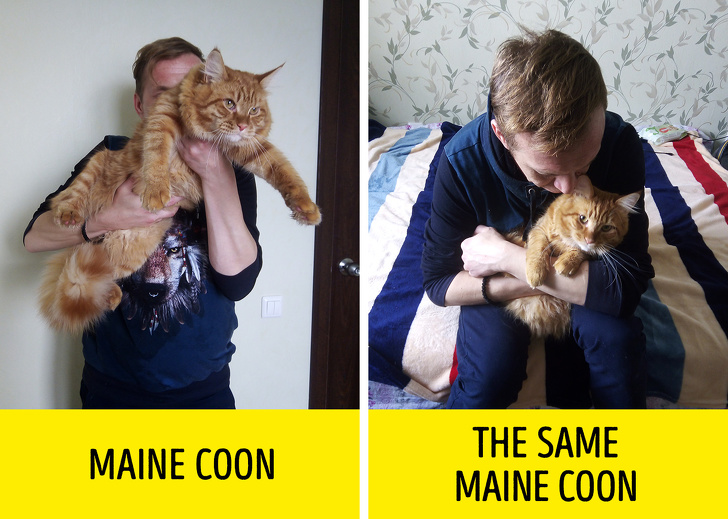 Perhaps each of us has seen photos from cat exhibitions where the proud owners of Maine Coons stretch them to the full length, which makes these animals look huge. There are legends saying these cats can weigh anywhere from 35-60 pounds. In reality, they are not as big as breeders try to make us think. They have their standard, which is: 11-18 pounds for males (neutered ones can reach up to 27 pounds), and 6.5-11 pounds for females (spayed ones can reach up to 17 pounds).

If we compare them with the tabby cat of my parents — she weights a little bit more than 11 pounds, just like a pretty big Maine Coon female cat. Then why do the cats of this breed look so huge in their photos? First of all, the right angle, where the head of the animal is located closer to the camera than the owner’s head and where its body looks long, makes the cat look like a giant.

Second of all, Maine Coons are really bigger than other domestic cats. They have well-developed muscles and very strong paws. As a rule, these parameters can be noticed even when they are kittens.

Maine Coons have their own diseases. 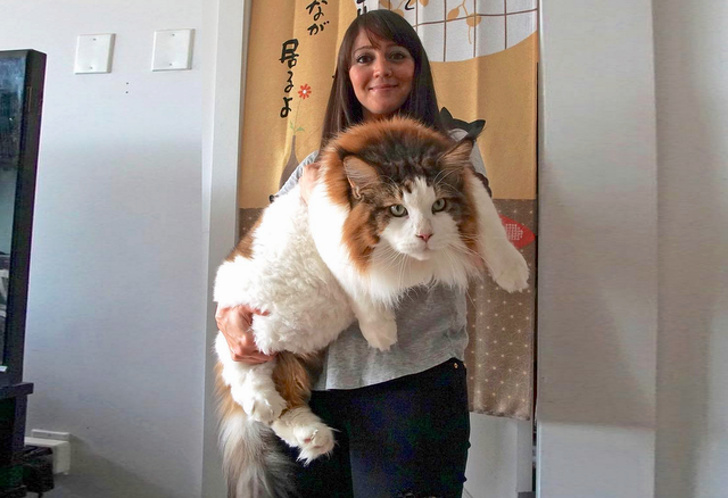 These cats are adapted for life in harsh climates, so they often have good health and a long life expectancy. According to data on life insurance for domestic cats in Sweden for 2003-2006, the average life expectancy of Maine Coons was about 12 and a half years, while more than 50% of these animals lived longer.

However, the breed has specific diseases. One of them is hypertrophic cardiomyopathy. This disease usually manifests itself in middle and old age. It can lead to pulmonary edema, sudden hind limb paralysis, and death. Due to problems with their hearts, they are required to have an ECG and an ultrasound of their heart done before their castration or sterilization.

Another specific problem of the breed is spinal muscular atrophy. It can be noticed even when they are kittens — the back part of their body sways when the animal walks, in addition, they can’t jump on the furniture.

Maine Coons are also more likely to suffer from hip dysplasia than other breeds. This disease manifests itself in old age and the animal begins to limp.

They are friendly but not tame. 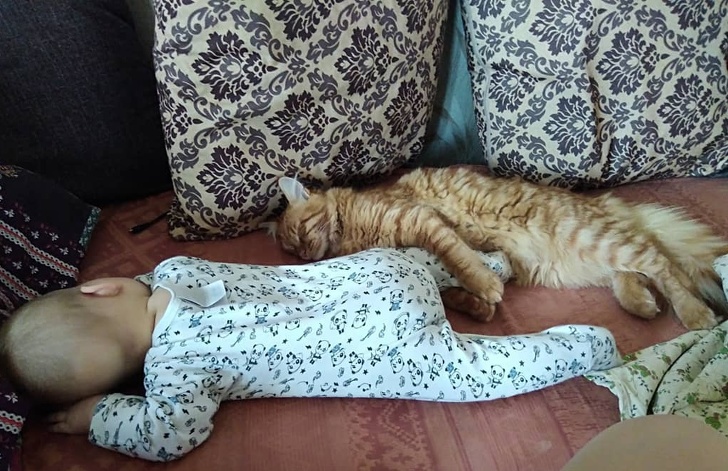 Maine Coons are often called “soft and tender giants” for their flexible and kind nature. Breeders say these cats are loyal to other pets and children and are faithful, like dogs, when it comes to their owners. Our cat doesn’t bite or scratch when our 10-month-old kids try to play with him.

But breeders don’t tell you that Maine Coons don’t like to get picked up or be hugged. These cats are affectionate only when they want to be.

They are eternal kittens. First of all, these cats get mature later than other cats. They reach puberty at the age of 1, and they stop growing at 3, and in some cases, even at the age of 5. Secondly, even after having grown, Maine Coons still preserve their childishness.

In addition, they perfect their jumping-to-high-places skills with age. That’s why you can sometimes find them on a kitchen table, stealing a flower from a vase, or pushing a porcelain figurine off of a shelf. Experienced Maine Coon owners remove all this stuff, even from the highest of the shelves.

These cats can be too loud.

Many Maine Coon owners claim that the vocal cords of these cats have a special structure and, instead of meowing, they make melodious sounds. That’s not exactly true. These cats are really capable of making melodious sounds, but they can meow like normal cats too. You may end up getting a very “talkative” Maine Coon, which is why you shouldn’t listen to the breeders if you are the one who likes to enjoy silence. Some experts believe that this trait came to Maine Coons from their distant ancestors — ship cats, who used to spend a long time at sea. Many owners claim that their pets move their paws over the water in a funny way, as if making some magic — in reality, they’re “digging out” the water. It is believed that this habit remained at their genetic level from life in the wild, when it was necessary to clear puddles of branches and leaves.

Oftentimes, Maine Coons end up turning over the water bowl and flooding the floor while “digging” the water. That’s why some owners put a big basket with water in a bathtub for them that is impossible to turn over. When seeing a big bowl with water, our pet likes to dip their paw into it and drink from it, like we would drink from our own hand. 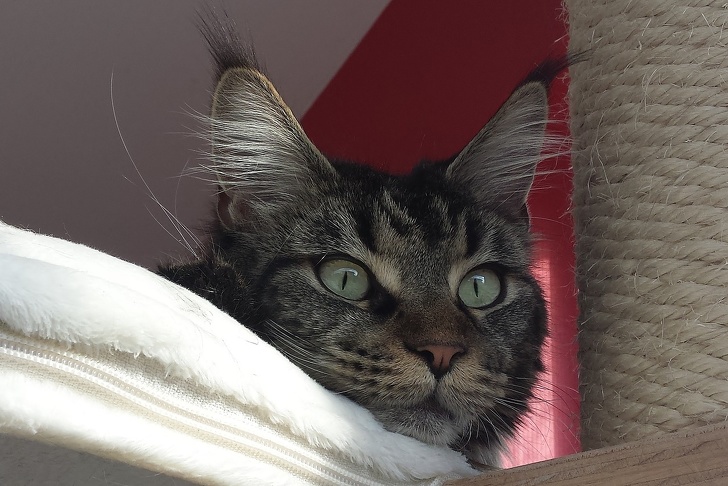 Maine Coons have a lot in common with dogs. As a rule, they choose one owner and remain faithful to them for life. If out of all members of your family, your cat chose you, you are lucky, but there are some disadvantages as well. They are likely to not let you get isolated in the toilet or bathroom. The doors in the room you are in should always be open.

These animals basically hate staying alone. At the same time, the cats of this breed can be taught some dogs’ tricks. Our cat knows the command “Go, get it!”. Some owners claim they have even taught their Maine Coons the command “Sit.”

These cats are choosy. Maine Coons like to and are able to take care of themselves well. Sometimes it might seem like they are obsessed with their appearance. There is a reverse side of this feature too — it’s hard to meet their needs when it comes to the cleanliness of their litterbox. We had to try many various cat litters before we found the one he approved of.

Moreover, the representatives of this breed care about their nails a lot. In order to not scratch the people they love, Maine Coons scratch everything around them. A scratchpad won’t help because it will become another “manicure” spot that doesn’t necessarily stop them from using the others (chairs, wallpaper, sofa).

They don’t necessarily have a brutal appearance. 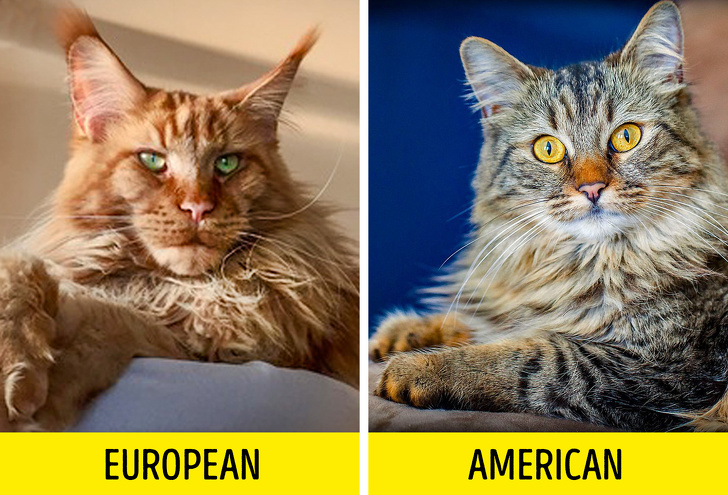 Maine Coons are believed to have a very intense appearance. All because of the specific predatory incision of the eyes and the massive zone of the mustache and chin, which is called the “box.” Some people jokingly compare their pets with Ron Perlman.

In fact, this breed has 2 types: Eurocoons and American Longhair. The brutal appearance is intrinsic to the Eurocoons. The American Longhair has a more graceful muzzle and smaller ears with neat tassels. Their hair is also thicker and silkier.

Would you get yourself a Maine Coon? Do you already have one? Please tell us about your pet.