Society has certain expectations for boys and girls. In addition, old-fashioned, century-old traditions dictate how children of different genders should behave, what hobbies they should have, and even how they should feel. In reality, some of these rules should be ditched in modern life.

For example, some boys are being raised as true gentlemen, leaving their own needs behind, while others are taught to always be able to show their strength, declaring that life is a fight. The Elite Indian editorial team has people raising sons too and they confess that some wide-spread rules for raising boys annoy them to the core. Psychologists agree with them. And here are the mistakes we are talking about:

When boys are told that any situation should be figured out by taking it out. Psychologists say that modern people are not ready to completely abandon aggression yet. This is a natural defense mechanism which, in some situations, may be the only way out. For example, when a kid of the same age has an aggressive attitude toward your child and it’s impossible to avoid fighting with them. Your boy might get humiliated by trying to resolve the conflict with words, so when this happens, it is extremely important to be able to stand up for yourself.

It’s necessary to teach a kid to show that he is ready to give a fitting rebuff in case of a fight and that he is not afraid of the opponent, though he is not going to be the first to start the fight.

When sons are encouraged to show aggression Everything said in the previous paragraph doesn’t mean that you need to teach your sons to resolve any conflict with brute force. Though some parents have a different opinion and encourage their sons to attack anyone who’s behaved inappropriately toward them (for example, pronounced their name incorrectly, took a toy without asking for permission, or refused to play with the offended kid). “Standing up for yourself” doesn’t always mean “attack right now.”

When parents call any girl their son communicates with his bride 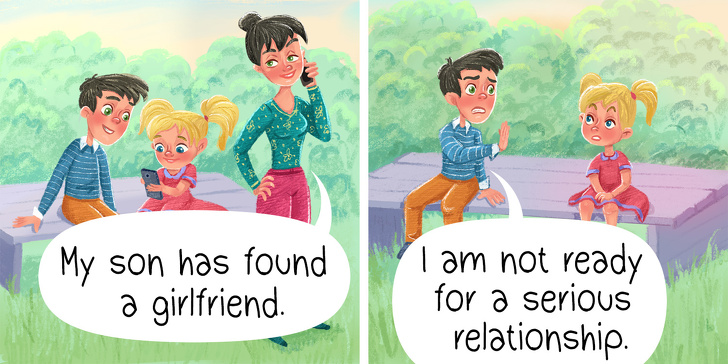 Mothers and grannies think that it’s cute when their son or grandson mingles with a girl. This is done without any bad intentions and, of course, at that moment adults don’t think that this girl will become their son’s bride one day.

But kids might not appreciate this humor and if emphasizing any contact with girls becomes constant, the future man may be wary of communicating with women. He will feel as if he simply can’t be friends with them or have a nice time together. This parental behavior is dangerous for several reasons.

When boys are made to always give way to girls The other extreme is to try to raise a true gentleman from a boy, while putting his personal needs, desires, and even an absolutely normal feeling of justice on the back burner. It’s hard for the kid to understand why a person of one gender has privileges over a person of another gender. Especially if we take into account that girls are rarely weaker than boys when they’re younger. Their physical characteristics are approximately the same. It’s understandable that older generations feel very pleased and happy when hugging your son or getting a kiss from him. But try to recall your childhood: few of us really liked these tender moments with elderly people. It’s one thing that a kid himself wants to hug, but it’s a totally different story when he is made to do it by being told that he will upset his granny. No one wants to spoil the mood of their beloved granny, right?

But children’s dislikes are not the only pitfall of this situation. According to psychologists, this behavior of the older generation may cause the child to get the wrong idea about his personal space, which doesn’t promise anything good in the future.

When boys are dressed in their finest when they go outside The main task of going outside is to let the child get out all of his energy, run and jump, satisfy his curiosity, and breathe fresh air. Of course, the boy will be able to breathe fresh air while sitting on a bench or slowly walking along the paths on the playground, but he might get dirty doing the first 3 things.

That’s why you should always think about your son’s needs before worrying about what other moms will say about the appearance of your kid. It’s better to wear clothes that can be stained and let your boy dig in the dirt to get bugs, kick the ball while not being afraid to fall on the grass, and go down the slide not thinking about whether it’ll leave rust stains on his clothes. All these are much better than dressing him like a tiny executive and depriving him of all pleasures.

When people say that boys should stop being breastfed as early as possible. Oftentimes, those in our surroundings who worry about boys’ mental health recommend that mothers stop breastfeeding once the kid starts to walk. They claim that a boy starts to understand everything from this moment on and if the mother keeps breastfeeding him, he might grow into a man with an excessive interest in a woman’s body.

In reality, this theory has no scientific evidence to back it up. But there are many studies confirming that breastfeeding is extremely beneficial for babies and there is nothing shameful in still doing it after the child turns 2 years old (no matter whether it’s a girl or a boy).

What myths regarding child rearing do you have to encounter most often? Try to remember the way your parents brought you up: which of their behavior patterns would you ditch?