Profiling — the estimation of the psychological portrait of a passenger, doesn’t end at customs. After the security checkpoint, you board the plane where the most interesting things start. The smiley attractive flight attendants are actually walking and talking scanners that can tell a good guy from a dangerous person just by looking at them once.

We at The Elite Indian have done some research and found 7 things that flight attendants watch out for when we board a plane.

1. A flight attendant will definitely notice you if you don’t say “hello.” There is a reason why flight attendants say “hello” to you: it’s part of their profiling process. If a person can’t even say “hello” back, then there is no chance they will help in case of an emergency. If someone is friendly and not hostile, this generally says a lot about their character and they will most likely help out in a dangerous situation. Before boarding the plane, airport employees may ask a passenger for a note from a doctor that says that their illness presents no danger to the people around them and cannot be spread via the air. But the person that coughs and has runny nose can be allowed on the plane if they say that they’ve had an allergic reaction to cats. This is a lot of trouble for flight attendants, because they have to ask them how they feel, pay extra attention to them, and also look for a seat far from the passengers that are afraid of getting infected.

4. You have leaflets and brochures. What if a passenger starts talking to everyone around them, trying to convince them to join a cult or something like that? The main job of a flight attendant is to make the flight as safe and comfortable for everyone as possible. This is why agitated passengers who want to share their wisdom with everyone around are a nightmare.

5. You use a lot of interjections and speak too fast when answering questions. 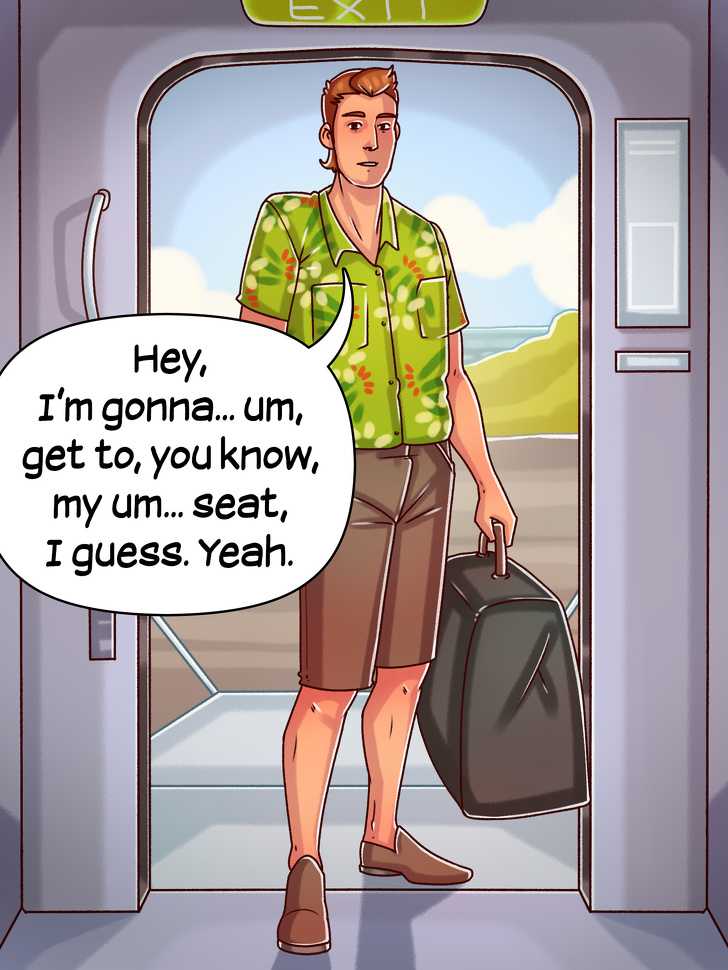 A lot of interjections and pauses are signs that someone is worried. So if people speak very fast or very slow, this is alarming for flight attentions. This is what people hiding their true intentions do. Of course, nobody expects you to speak like a news anchor, but if you look suspicious and speak so that you are hard to understand, you may get some extra attention from flight attendants. If a flight attendant is smiling at you and looking at your strong arms it is, most likely, not because you are very handsome. In fact, she has identified you as a potential source of help. You might be useful if there is a loud or troublesome passenger, an old lady with really heavy bags, or if it is necessary to open the emergency exit. Flight attendants are as happy to see big, strong people as they are when there is a doctor, a pilot, or a rescue team professional on board. Scratching your head and wrists, tensing your facial muscles, coughing, nodding and shaking your head, changing positions too often, and other non-verbal things are signs of a person that is trying to hide something or even who is plotting something. When someone laughs too much, it might mean that they are too worried. These passengers often require more attention and patience, just like people who are scared of flying. A person that is unstable is quickly identified and flight attendants memorize where they are seated and watch out for them. These people might get aggressive, which might affect the safety of the flight.

Again, profiling is not about making conclusions based on just one word or action, it is a combination of estimations of behavior. Our own safety depends on the ability of the flight attendants to make these conclusions.

Do you have any experience flying with weird passengers? Tell us about it in the comment section below.