Fashion is cyclic but sometimes it returns to the things we really want to forget. For example, bright-red dresses or fishnet shirts. The dominating tendency of the past year is the return of the provocative and bold fashion of the 2000s. The iconic images we know from our childhood are returning to the runways, red carpets, and city streets.

We at The Elite Indian are convinced that it’s not fashion we should be following, but common sense, and some trends of the past were really cool and are worth trying again. Big and small, the ones that look like a fishnet or something more elegant — netted clothing is back in business. They are on the runways, red carpets, and in trendsetter’s wardrobes. This kind of outfit spent a lot of time in the spotlight in the 2000s, and the same is happening now. It is up to you to decide whether this is a bold statement or just some vulgar short-lived trend. There was a time when the style of Lara Croft was respected and copied by every teenager, and then some more elegant styles became trendy. In fact, pants that are this wide are very comfortable, so it is no wonder that they are back. And the people who don’t worry about the ever-changing fashion trends didn’t even know that these pants weren’t trendy for the past decade. Kourtney Kardashian even added an important accessory — a chain on her belt loops.

This trend is totally impractical, but still very feminine-looking — and it was a dream of all the fans of Charmed. It is coming back again in 2020. Trendy girls know that this piece of clothing highlights a beautiful body and looks great with high-waisted jeans and skirts. 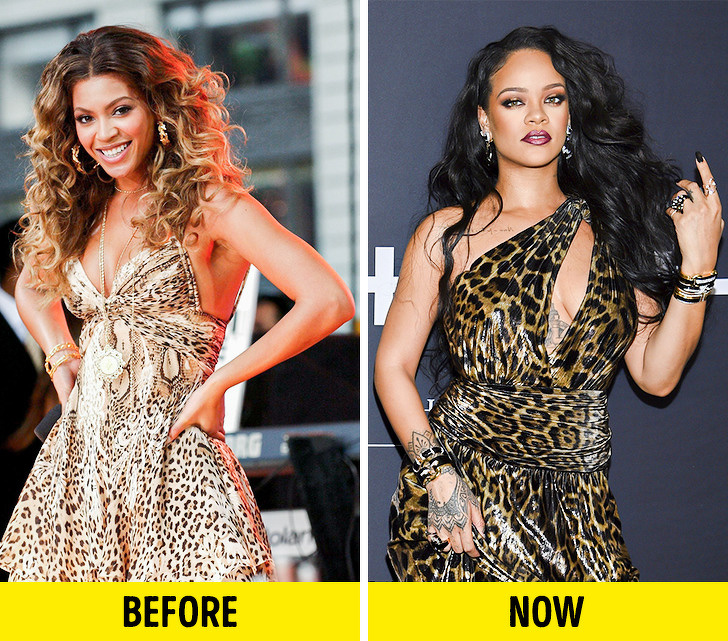 Women will never stop loving animal prints and wanting to imitate elegant leopards. Fashion stars forgot about this trend for a while, but today it has become popular again. You don’t have to wear a leopard or a snake print from head to toe, it is enough to wear one accessory in order to make any boring or trivial outfit look fresh again. Are your eyes tired from those acid-looking colors? Bright is not only back, but it is also super-successful in the fashion industry now, so we are going to have to enjoy seeing fuchsia in the spotlight! The trend for this mega-bright pink is on the rise with the Instagram generation. 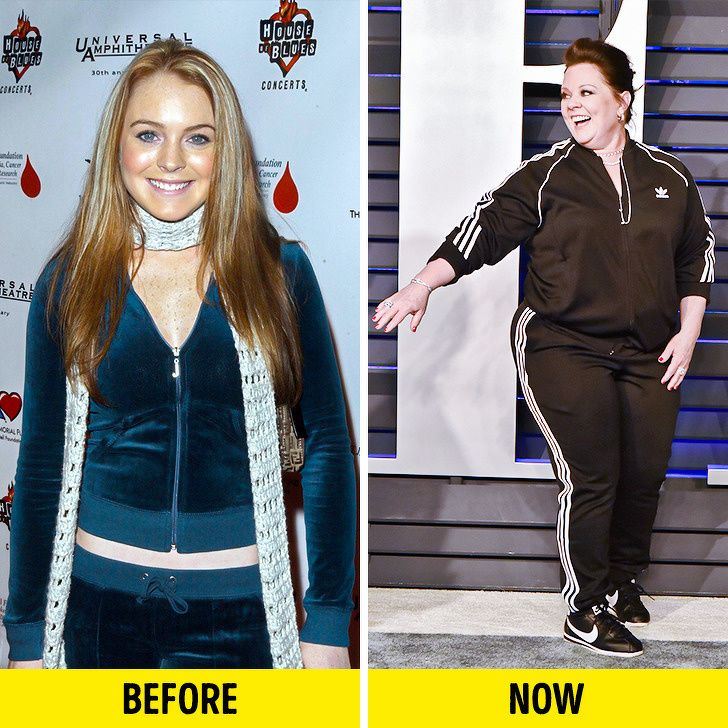 When celebrities from the middle of the 2000s started wearing the Juicy Couture tracksuits made of velour or crazy colors, it shook the fashion world and everyone tried to forget this trend like a nightmare. Today, there is a tendency that says you can wear sportswear any time you want and there is even a hashtag for this trend, #TracksuitNation. Fashion brands are making entire collections with sweatshirts, sweatpants, and hoodies with rhinestones. This old trend is living a new life in the mix of street and luxury fashion.

7. Thongs visible from under clothes One of the most controversial trends of the 2000s is back. Experts from the fashion industry say that women who decide to show this undergarment should make their outfits as minimalistic and simple as possible. 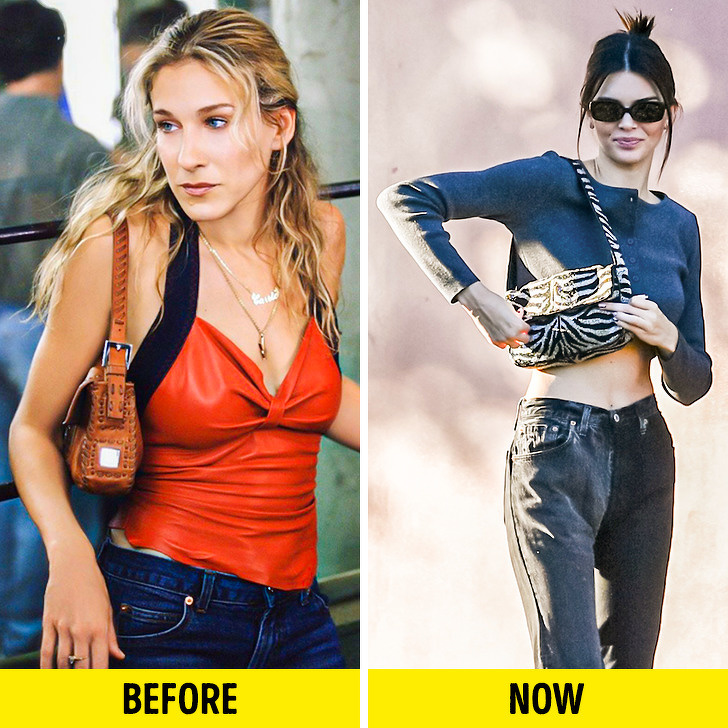 The bag with a magnetic buckle, that became legendary thanks to the New York journalist Carrie Bradshaw portrayed by Sarah Jessica Parker, is trendy again. The sales of the Fendi Baguette in the past year have increased by 164% and every trendy woman thinks that she has to own one of them. 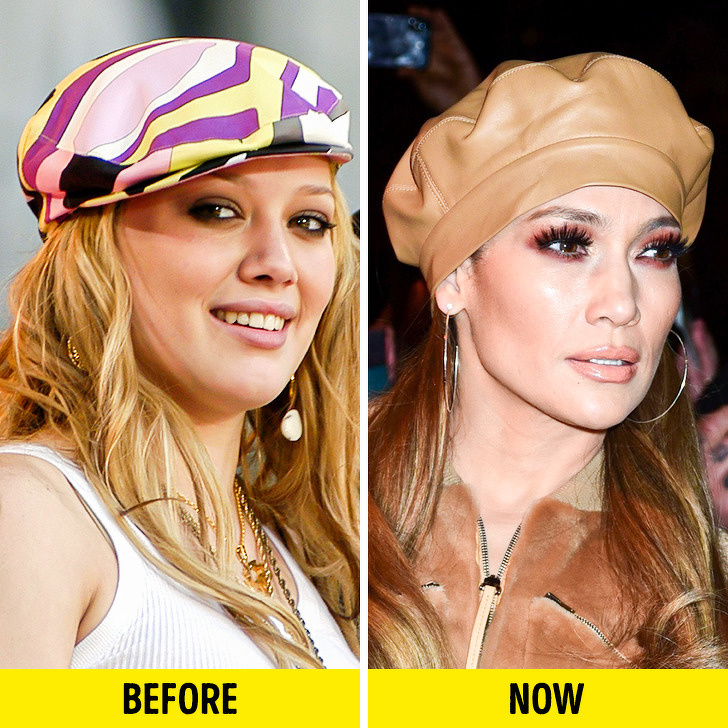 Vivian, the character of Julia Roberts from the iconic film Pretty Woman, made them trendy. Kepis were really popular at the end of the ’90s and the beginning of the 2000s. Then, the trend kind of died out and is coming back to life right now.

10. Dresses on top of jeans This is another ambiguous trend that is making its way back to the city streets. Only the most confident and brave women follow it because many layers of clothing are their own kind of art. You have to be able to combine the things that can’t be combined in order not to look funny and inappropriate. 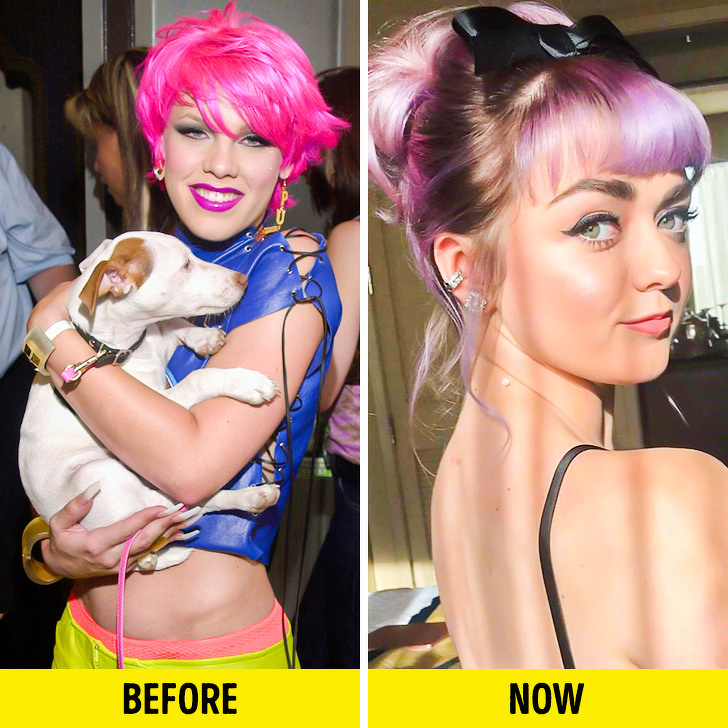 At the end of the ’90s, girls used to buy mascara for their hair or dye their locks, in an attempt to follow their idols. This year, the same thing is happening: women are dying their hair to highlight their individuality. Even the star of Game of Thrones couldn’t resist and got herself some bright-colored hair. There are very few people who buy Louis Vuitton pajamas for $3,000 and don’t share a photo of them on Instagram. Clothes with logos have become some sort of a statement of a person’s financial status — people wearing a Gucci T-shirt are sending a message saying, “I can afford this.” They really can afford it, but the people around them don’t know how to react to these statements.

13. Blazer with nothing underneath This is very impressive and totally impractical in real life. Of course, women that want to attract attention to their breasts will always find a way to do it, but this trend is pretty strange. The color that first existed to make military equipment hard to see in the field became iconic back in the ’60s as a civilian protest against the war. In the 2000s, the camouflage prints were everywhere. The people that wore these clothes were the opposite of “hard to see,” they attracted a lot of attention to themselves. And these clothes still achieve the same purpose today.

15. Neckties with all sorts of clothes This trend is back at the peak of fashion. What is interesting, women can wear ties in a way that men can’t: it can be untied, over their shoulders, with a suit, a shirt, a T-shirt, or a blouse. 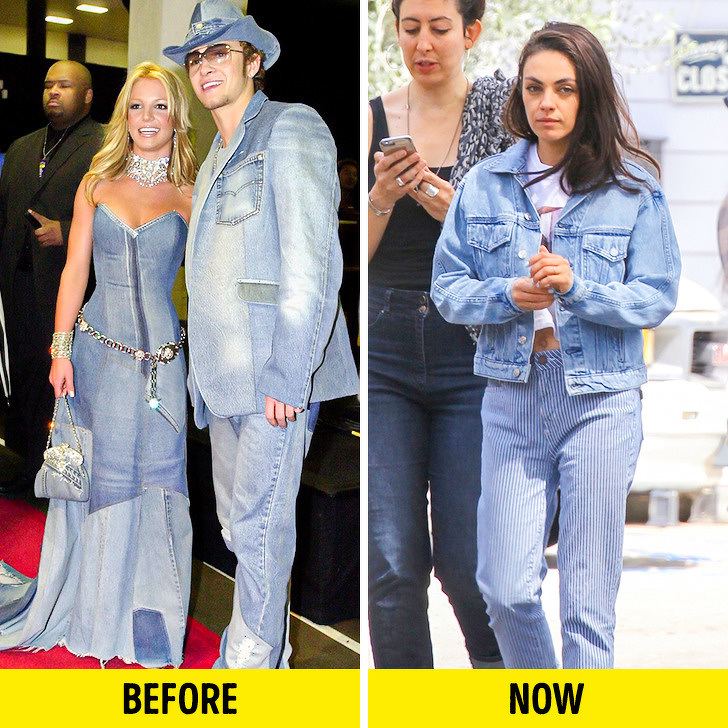 Fashion has turned out to be quite sentimental and it has returned to the denim dress, jacket, and bag trend. Denim is not only back, it kind of blew up the whole industry: there are even denim-colored nail polishes and jewelry collections. A long and thin scarf won’t help with the cold, but it can be a great accessory for your look. The stars of the 2000s knew that and today’s stars are doing the same thing. Now, you can put it on your neck, use it as a belt, or even tie it into your hair. Hoop earrings in different diameters could be found in every trendy girl’s wardrobe in the 2000s, but then this trend was forgotten. If you had some of these and you haven’t used them for 10 years, it is time to go find them again, just like Meghan Fox, Taylor Swift, Khloé Kardashian, and Rihanna did.

Which fashion trends do you miss and do you have any of these items in your wardrobe?

6 Indian Tips to Keep You Young and Healthy

Science Explains How Stress and Anger Lead to Weight Gain