Japanese scientists have proven that the way we experience various tastes changes greatly as we age. Ice cream in childhood really tastes sweeter, while many vegetables are awful because they taste bitter. While growing up we gradually lose the sharpness of perception and this is good in some sense because it widens our culinary horizons significantly. But this also means that we need to get familiar with different dishes while our taste buds are still at their peak and we can enjoy those dishes to the fullest.

We at The Elite Indian are in love with various lists and that’s why we have looked through numerous dishes we need to try at least once in a lifetime. We even read the book by Mimi Sheraton called 1,000 Foods To Eat Before You Die. Based on what we found, we made our own compilation clarifying where these dishes are cooked the best. 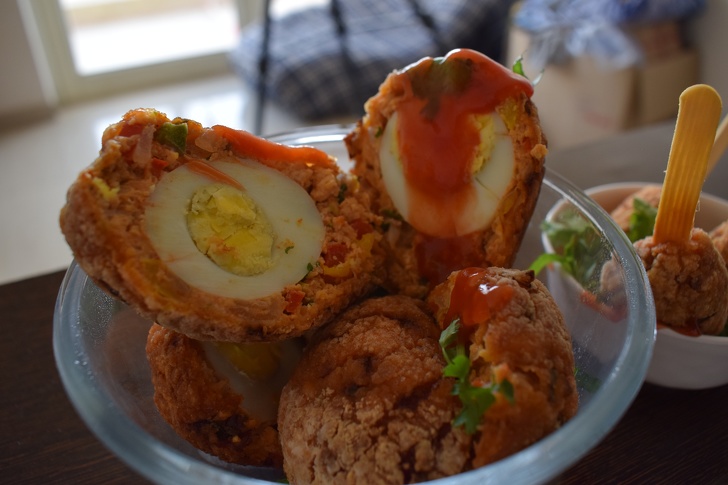 What it is made from: This golden, bread-crusted, and deep-fried “ball” of minced meat hides a surprise inside — a hard-boiled (in most cases) chicken egg.

Where to try it: Englishmen claim that the best place to try Scotch eggs is an old pub where you will be served a freshly cooked hot dish.

What it is made from: This tart is made with a thick custard that smells of lemon zest and is dusted with cinnamon and baked inside a pastry crust.

Where to try it: In Portugal. There is a line of people who can’t wait to try the best pastry in Lisbon in front of Pasteis de Belém bakery every day. What it is made from: Raw fish is marinated in freshly-squeezed lemon or lime juice. It is abundantly seasoned with chili, coriander, and thinly chopped red onions.

Where to try it: In Peru, where unique lemons with the sourest juice in the world grow. The most famous restaurant that specializes in making ceviche is called El Ceviche de Ronald. It’s located in Lima, the capital of the country. What it is made from: Chunks of juicy clams are fried in a batter made of flour, milk, clam juice, and eggs.

Where to try it: The best clam cakes are sold by street vendors in the coastal towns of Rhode Island (USA). Hot balls are served in small bags, and are eaten on the go. What it is made from: This soup made from cleaned eel with the skin removed in a thick green sauce. The sauce contains a bunch of various herbs like mint, oregano, thyme, nettle, tarragon, basil, parsley, chervil, and sometimes spinach, as well as ginger, butter, cornmeal, and shallots.

Where to try it: It originated in Flanders, Paling in ’T Groen is a national Belgian dish that is served in the best fish restaurants all over the country. A restaurant called Domein Park West in Antwerp city is especially proud of it.

What it is made from: The recipe for Thuringian sausage dates back to the 15th century and is carefully guarded by German butchers. It is known that it is made of finely minced meat (pork, beef, or veal) as well as caraway and marjoram. The sausages are cooked on a grill greased with bacon fat and served in a bun with local mustard.

Where to try it: Go to the Erfurt farmer’s market where you will be served the freshest and the most genuine sausages. Or you can visit the Holzhausen locality in the Amt Wachsenburg municipality where the German Museum of Sausages (Deutsche Bratwurstmuseum) is located.

What it is made from: French fries are covered with gravy and topped with cheese curds. French fries are crispy on the outside and soft on the inside, the sauce is moderately oily and salty, the slightly melted cheese has a perfectly dense and elastic texture.

Where to try it: It’s a national Canadian dish that originated in the French-speaking province of Quebec. The best Poutine is served in Montreal in La Banquise restaurant. What it is made from: Though Bouillabaisse is called a soup, it resembles a stew more in its consistency. It is made with the freshest seafood — no less than 3 types of fish, clams, octopus, crab, and lobster; vegetables like potatoes, leeks, and tomatoes; seasonings — a bouquet of Garni and saffron; and the final ingredient — a spicy and thick rouille sauce.

Where to try it: Traditional Marseilles bouillabaisse is different every day because it’s made from the fish that were caught on the day it’s cooked. That’s why it’s worth trying it in restaurants that have the best business relationships with fishermen. For example, in a port restaurant called Grand Bar des Goudes.

An apron is just a cape on backwards🌸✨ KESAR KHEER🦋 P.S:Had to prepare it for my kiddy to take it💞 🥗🥗🥗🥗🥗🥗🥗🥗🥗🥗 #foodporn#food#foodie#foods#healthyfood#foodgasm#instagram#foodies#indian#lucknow#uttarpradesh#foodiesofinstagram#cooking#cooks#indianfood#indianfoodblog#northindianfood #dessert #kheer #kesarkheer #indiandessert #dessertsofinstagram

What it is made from: This is a sweet pudding that is presented at every Indian carnival. It is made of rice that is mixed with flour, milk, and dried fruit. Saffron and cardamom give a special taste and aroma to the dessert. Slices of mango, cherries, or almond paste dye the Phirni into various colors, while the garnish made of rose petals, sliced almonds, and pistachios make the dish even more appealing.

Where to try it: You can buy Phirni near Hindu temples during various celebrations. What it is made from: The main character in this dish is the meat broth, while rice noodles and meat pieces are secondary elements. The soup is served with a pinch of fresh herbs and a big portion of lime juice.

Where to try it: In Vietnam. There this dish can be found in restaurants, but the best way to try it is on the street, at some side-of-the-road cafe or from an individual seller.

What it is made from: This sandwich cake is made of white or rye bread with a creamy filling in between. On one piece, you can find anything from liver pâté and olives to grapes and cucumbers to cheese and ham to fish cakes, which are made up of shrimp, salmon, caviar, and lemons. Eggs and mayo are almost always the base of this sandwich.

Where to try it: These bread cakes can be bought in Finland, Sweden, and Estonia, but the tastiest smörgåstårta is the homemade one called voileipäkakku. This is what hostesses in Finland call this dish when prepared for some celebrations. What it is made from: Deep-fried anchovies breaded in cornmeal. If it is served with arugula and thinly sliced sweet onions in a freshly-baked, crispy bun, it is called Hamsi Ekmek.

Where to try it: Hamsa is a winter fish and it is available (fresh) only from November to February. Go to the fish market in Fethiye or to the Istanbul Karaköy Fish House to enjoy this dish. 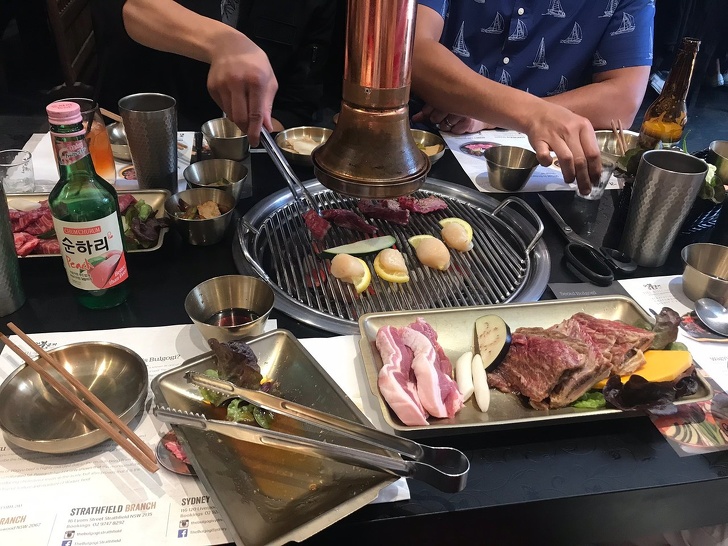 What it is made from: Literally, bulgogi means “fire meat,” which is actually a Korean version of barbecue. Thinly sliced meat — beef, chicken, or pork, is marinated in a soy sauce and sesame oil with seasonings. Afterward, every dining patron cooks their own pieces of meat themselves on a small grill located in the center of the dining table.

Where to try it: In Seoul. The Byeokje Galbi restaurant uses only Hanwoo — high-class Korean beef, similar to the famous Japanese Wagyu beef, for cooking Bulgogi. What it is made from: It’s a smooth and silky egg custard dish. It’s savory, not sweet, and it’s seasoned with soy sauce, mirin, and dashi broth, which is the base of the dish. It contains shrimp, shiitake mushrooms, kamaboko (a type of cured surimi), and ginkgo.

Where to try it: In Nagasaki. The Yosso restaurant has specialized in cooking Chawanmushi since the end of the 19th century.

What it is made from: It’s a cold soup made from whole fresh sour cherries (including the pits), sour cream, white wine, cinnamon, and cloves. If white wine is replaced with red wine, some honey is added, the herbs are replaced with rosemary, and the dish is then called Transylvanian Meggyleves.

Where to try it: Varieties of this soup can be found in any cafe or restaurant in Hungary, but only during the hot seasons.

What it is made from: This ugliest of the tastiest desserts all over the world is not a pizza at all. It is more like a cookie-granola bar made of sweet shortbread with dried grapes, candied fruits, almonds, dried apricots, and dried cranberries inside.

Where to try it: In the last kosher bakery in the Roman ghetto — Pasticceria Boccione. Keep in mind that people start to line up from the early morning, long before it even opens, to try this. What it is made from: Escamoles are the “earthly” analog of black caviar — a delicacy with a soft buttery-nutty taste. It has a pleasant texture that feels like cottage cheese and though the dish looks like it’s made of small grains of rice, in fact, it is really ant larvae.

Where to try it: Only in Mexico. Taking escamoles out of the country is a crime. Visit this country from February to April, the season for this dish, and go to the Fonda Don Chon restaurant, which specializes in dishes from the pre-Columbian era.

Do you have your own list of dishes that someone should try at least once in their lifetime? How different is it from ours?