“Indifference is scarier than cruelty because cruelty is a rare thing, while indifference can be seen everywhere,” — that’s what the classical literature writers thought in the 19th century and few things have actually changed in the world since then. One of the ways a person is assessed today is by their attitude toward animals who’ve found themselves in a difficult situation. Not abusing them is only half the battle, helping them is what it’s all about.

The Elite Indian authors were touched by the stories we found on Pikabu, Reddit, and Overheard. We want our readers to know about them too. At the end of the article, there is a short story about a little girl who met a homeless person.

There was a spaniel roaming, for several months, around the only market in my town, starting from summer to the first cold days. He was covered in dreadlocks, which made it hard for him to move around.

My mom decided to help him: we took the dog, tried to cut off those dreadlocks by ourselves, but we couldn’t since there was a big risk that we might cut his skin. It seemed his mats of hair had grown into his skin. We took the dog to a groomer who broke several tools when trying to cut the dreadlocks off, but who also later gave us a discount because we were helping this homeless dog. The dog turned out to have a really charming look, and the groomer even sprayed him with some special dog perfume.

Later when we were walking with him, everyone around us kept admiring him and asking, “Where did you get such a handsome dog?” From the very place where 90% of the town residents saw him and did nothing. © Cutty.sark94

I help homeless animals. People adopt sweet, charming, well-groomed animals right away. But of course, animals that have endured severe trauma don’t look that cute. That’s how they end up staying with me for living. I am happy my finances allow me to keep this army. Now when I come home, the following cats meet me: a cat with one eye, a cat without ears, 2 3-legged cats, a blind cat, a cat with almost no fur (her body has burns), and one in a wheelchair. They are the most loving and the most gorgeous animals to me! © hyper228

I am an avid coffee-drinker. Once, in between my college classes, I went to a coffee-kiosk. With my peripheral vision, I noticed 2 teenagers kicking something like a hat or a mitten. “These people have nothing to do: they’re in no hurry to get to class or to work,” I thought and turned around. At this moment, the “mitten” squeaked! I turned back and realized it was either a puppy or a kitten. I can’t stand when people abuse animals, especially little ones.

It was daytime in the central street of the city, people were rushing around in their own little worlds, and these 2 morons found entertainment that no one was seemed to care about. Except for me who had actually grown up among boys and could defend myself. I got the first punch to my ear, from the smaller boy, which made my hat fall off. That’s when I stopped being polite and hit the offender back. Then the second guy gave me a gut punch.

I don’t know what the end of this story would’ve been like if a large-statured man didn’t come to help me. The teenagers ran away and the man helped me get up. At this moment, the “mitten” started to whine in a pile of snow. It turned out to be a Yorkshire Terrier puppy.

I brought the puppy back to class while hiding him under my jacket. I washed him in the toilet and wrapped it in my blouse. In the corridor, many of the other students gathered around me and you know what impressed me most of all? Their phrases varied from: “Yeah, I saw someone kicking this pup.” to “Was it him who was being kicked?” to “Turns out, he is a good breed, I thought they were kicking a mutt.” to “Can I take him home?”

The vet said he had worms, several breaks in his tail, and mucosal inflammation. He was approximately 2 months old. So we started to treat him.

This small “mitten” was given the name “Pirate.” He is one month younger than my other bigger pup. He is a little and courageous dog. You know, I actually don’t like small dogs, but Pirate is a big and fearless dog who accidentally happened to be born into a small mitten-like body. © WeeSparrow We saved some baby, tiny, super-small squirrels! One was about to be dinner for some cats — and the other was about to be breakfast for a dog. They’re still too small to return back home without falling prey to other animals. © henlodan

Surprised my 10-year-old today on his birthday by letting him bring home a cat from the shelter. His cat was extremely shy and timid. When asked why he picked that cat he said: “I don’t know, he just seemed so special.” © aspencer80 / imgur My mama went into the shelter and yelled, “Who wants to be my cat!?” And Gomez the Siamese was the only one who meowed like crazy. He was with us for 9 years. He was my childhood kitty and I will always remember him. © MissShayla

We live in a private house in the suburbs of our city. Yesterday my kids and I went to throw out the garbage. When we were on our way back, our neighbor asked us:

— Did you see the kittens in there?
— Nope, where?
— They are tied in a plastic bag. I heard them squeaking and tore the bag.

We went back to the garbage bin, found the bag and started to think about what to do. My kids asked, “Mom, why did someone do this to them?” How can someone put 2 innocent creatures into a plastic bag and throw them to the garbage bin like unnecessary trash or leftovers? I don’t know what happened to humans, but I myself couldn’t answer my kids’ question.

I breed chicks and my husband jokingly calls me the “chicks’ mom.” Now I am also the “kittens’ mom.” © Marans I suffered from nightmares for a long time and I didn’t know how to stop them. Recently I found a cat. I washed him, treated his injured paws, and kept him with me. The cat is black and fluffy with green eyes, but he has a stern character. He hates everyone and mostly hisses at them — I’m the only one who can pet him. Also, he only sleeps with me — right on my head. He lies around my head like a hat and the most surprising thing is that I stopped having nightmares. My loved ones keep laughing at us but I now have a real live dreamcatcher. © overheardaboutanimals / vk

Our kitty was found under a porch in a snow storm! She was pretty frozen. We touched her eye and she didn’t blink or back away. A year later, she goes crazy for the snow! My boyfriend had a cat that passed away. She looked just like him! She’s been the perfect fit for our little family! Best kitty ever! © agarci_0504

We have a lot of cats in our neighborhood. So my wife makes a lot of cat shelters out of coolers in the winter so they don’t freeze. © Cabalagent1

My friend adopted this sweet baby and I think you all need to see it. © themindmd / Reddit 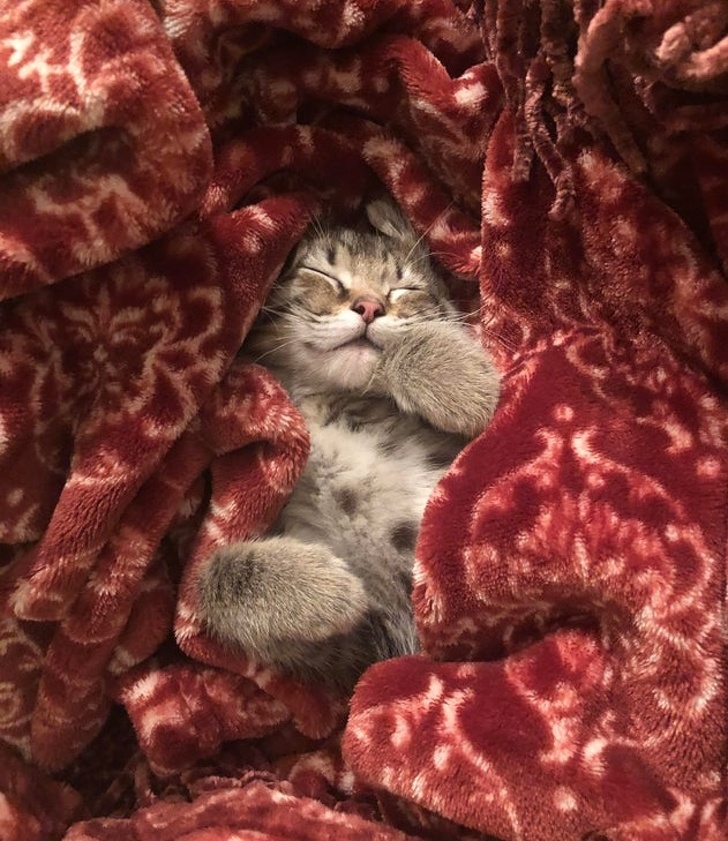 My girlfriend just adopted a cat who was having trouble adjusting to a new house. Which is why she just laid there and slept with him on the floor, in the place he chose. © Abortivora

Today I started crying at the animal shelter because one cat hugged me and nuzzled into my neck. © Flowwwerr / Reddit 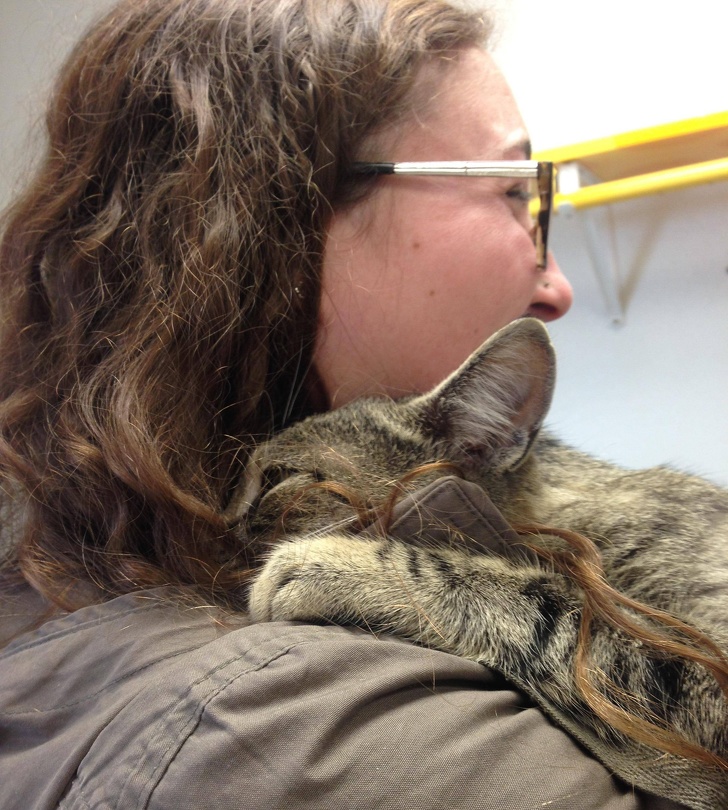 2 days ago was National Black Cat Day, and I heard that many black cats go unadopted. I’m not a cat person, but my wife and I adopted a gorgeous 7-year-old black cat as our first cat. © KevdogFTW

Pavel Abramov, a 9-year-old boy from Russia, draws animal portraits and exchanges them for medicine and food for shelter animals. A little human with a big and kind heart. © overheardaboutanimals / vk Bonus: Today a homeless man came up to my 3-year-old daughter. He was unkempt and smelled like old alcohol, with the saddest, watery eyes. My daughter reached out, touched his face, and said: “It’s okay.” He started to cry, thanked us, and left the bus at the nearest stop.”

The life of any living creature is precious and we should remember that sometimes it’s important to not just pass by, but to save an animal if we are able to. Have you ever saved a homeless animal?