Becoming a musician requires exceptional talent and an outstanding personality. Both factors are highlighted by some groups, duos, and individual singers by adding a unique and anonymous touch: eccentric masks and sometimes unconventional costumes. These mysterious “characters” often stay unidentified for several years, letting the artists go completely unnoticed on the streets and undetected by the press. That way, they manage to stand out for their music instead of their everyday lives offstage.

The Elite Indian was interested in this topic and wants to share a list of musicians who rarely reveal their identities. At the end of the article, we’ve added a bonus feature that talks about a band that remained anonymous for a while but whose members are human, just like the rest of us. 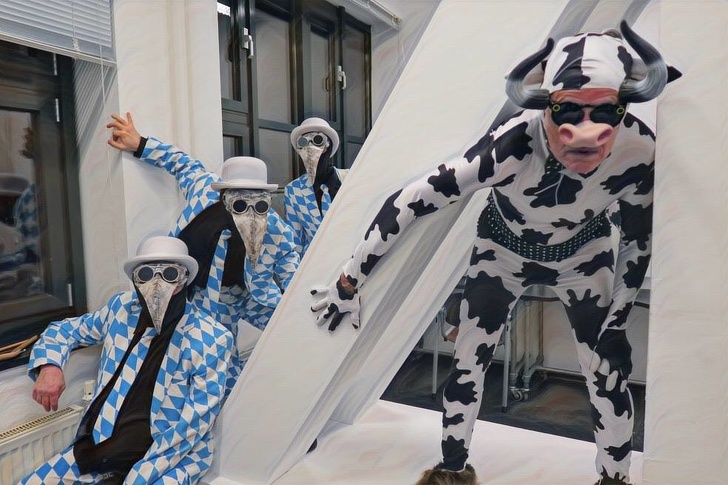 The Residents are an American band whose members have remained active and anonymous since the 1970s. The group began as a pop-art collective in the United States and is famous for its rock/pop music, as well as for its multimedia productions, mini-series, and short films. Although the band appears on television and the musicians partake in interviews, they always hiding hide their faces under masks.

Homer Flynn is their spokesman, a man that often shares news and updates on behalf of the group. Some Internet users have gone as far as believing he could be the lead singer, but he has denied it to this day. According to an interview given by Flynn, the band members prefer to hide their identity to keep a healthy distance between their public and private lives. 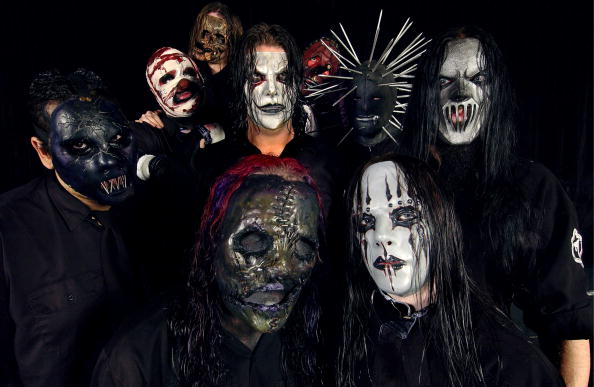 Slipknot is a heavy metal band that originated in the United States in 1995. Their success not only is attributed to their stunning music but also to the eye-catching masks they wear at their concerts and events.

Each member of the group hides their face under a mask that parodies a personality trait which tends to change over the years. In 2019 on their latest album release, they revealed the new masks they will wear from now on.

Claptone is a German musician and producer. He became well known for his work in the electronic music industry and for appearing publicly at shows and events in a golden bird-shaped mask and white gloves. Everything indicates that he got some inspiration from the characters from the Commedia dell’ arte. His attire has allowed him to keep his identity private, even today, so details about his life are unknown.

Some people believe Claptone really consists of two people because he’s performed in 2 different places at once. A while ago, the artist explained his reason for covering up, saying, “I want to touch people with my music, either with my performance on stage or with the songs I write. I don’t want them to talk gossip about me. I don’t want them to intrude into my personal life.” 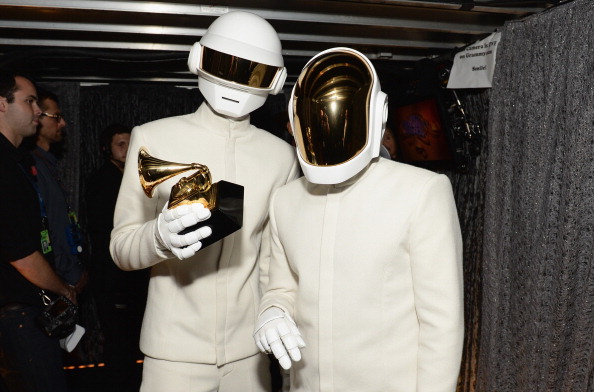 Daft Punk is an electronic music duo comprised of French musicians Guy-Manuel from Homem-Christo and Thomas Bangalter. Since the ’90s, when they became famous in their country and in Europe, they’ve both concealed their bodies under robot helmets, elegant suits, and gloves. Despite their fame, they rarely give interviews or take off their helmets. 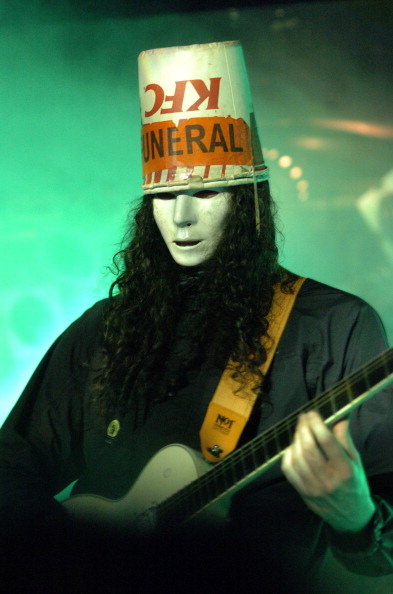 Brian Patrick Carroll is the man behind Buckethead’s identity, a character that wears a white plastic mask and a Kentucky Fried Chicken bucket-hat with the word “funeral” on it. Carroll is an extraordinary guitarist who has collaborated for years with legendary bands such as Guns N ’Roses and has composed several tracks himself.

On stage, he plays his electric guitar and makes his character dance like a robot. Although his name is overtly recognized, nobody knows a thing about his private life or his appearance, which also remains a secret. 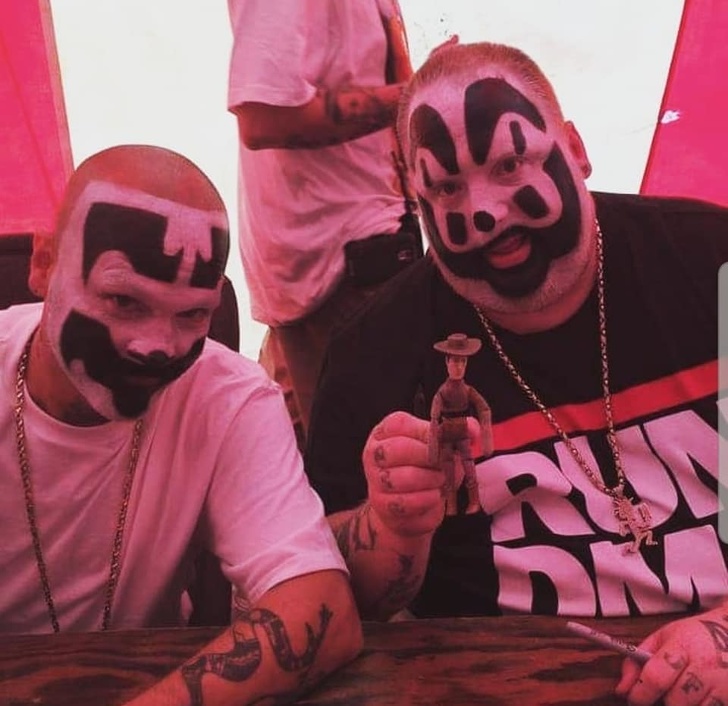 Joseph Bruce (Violent J) and Joseph Utsler (Shaggy 2 Dope) are the stars behind this hip-hop duo that originated in Detroit. For every one of their concerts, the singers put makeup on their faces to resemble evil clowns and perform their parts on the stage. They even performed at Woodstock, a show that will never be forgotten. 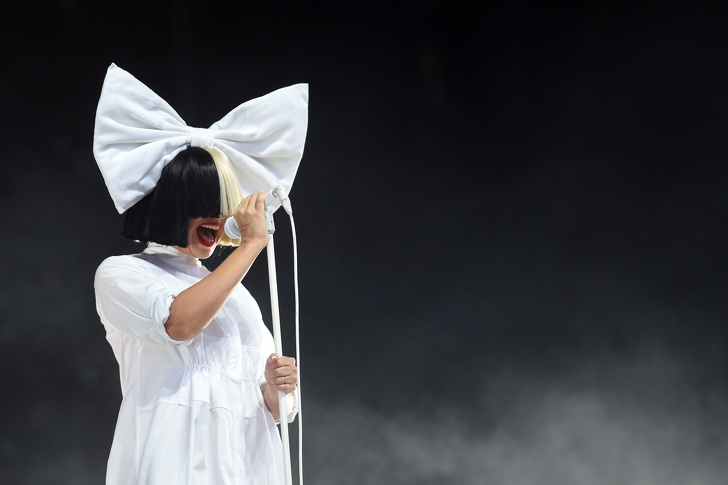 The Australian singer Sia Furler is one of the most famous artists on this list. She’s caught the attention of a wide audience because of her lyrics, bold personality, and unconventional outfits. Despite her fame, she prefers to cover her face with a wig and a massive bow. She made that decision to be able to have some privacy and go outside without being chased by cameras. “It’s just so that I can go to Target and no one would be following me with a camera trying to get a shot,” she stated on Ellen.

It’s worth clarifying that the person representing Sia in most of her videos is the dancer, Maddie Ziegler. 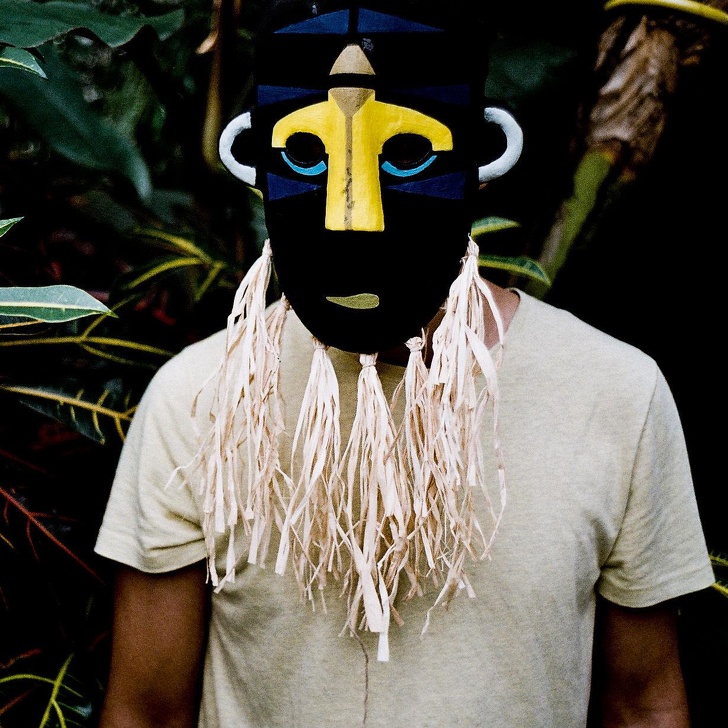 Aaron Jerome is Sbtrkt, a British musician who mixes hundreds of songs by artists like Radiohead or M.I.A. He performs wearing a ceremonial mask that represents Africa, India, and Central America’s native communities. The pieces are created by an anonymous designer known as “A Hidden Place.” 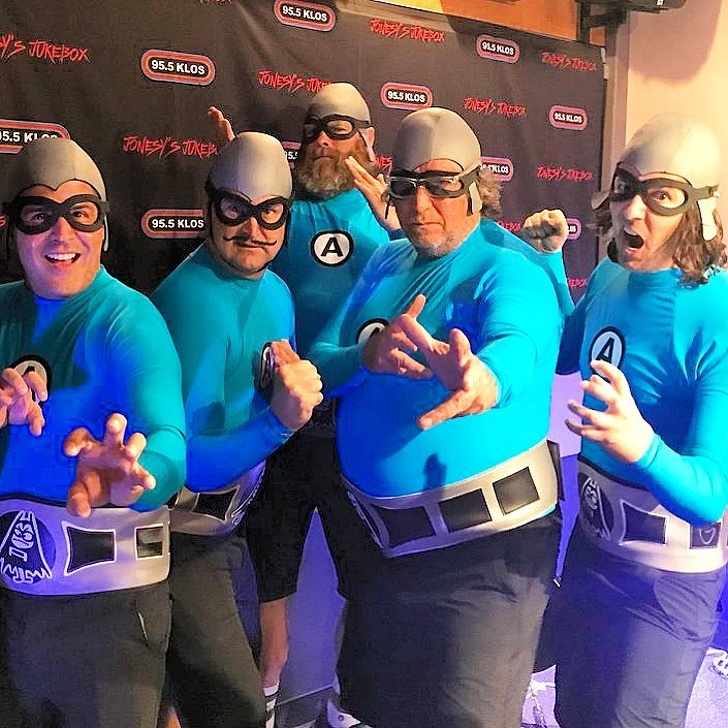 What began as a way to make fun of other punk and ska bands, ended up becoming a real band. The Aquabats are a group that appeared on the scene back in 1994 and mixes diverse musical genres while hiding under superheroes attire, silver helmets, and masks.

Their costumes are fashioned under the concept of men with superpowers that come from an island called Aquabania. Each member embodies a character with a silly name like Ricky Fitness, Jimmy the Robot, or Commander with Cape.

Since this tour started in April 2018, Cardinal Copia and the Nameless Ghouls have done 167 concerts across the world. Last night in Toulouse was a fabulous ending of yet another fantastic European tour. Now it’s time for a needed break before the absolute last date of the tour cycle – in Mexico City on March 3, 2020. Happy Holidays everyone! #cardinalcopia #namelessghoulettes #namelessghouls

This is a band that formed in Sweden in 2010, the same year they started to catch everyone’s attention with its eccentric performances. The band members hide their identities with a simple formula: 6 of them dress in the same clothing and disguise their faces with masks while the lead singer dresses up as an evil deity. Like Slipknot, the members transform their appearance with each new album they release. 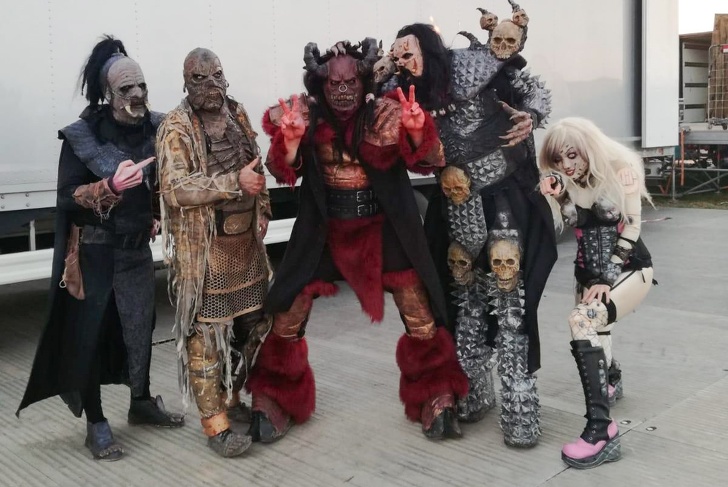 Known as “The Finnish Monsters,” Lordi was established in 1992 as a hard-rock band. Its members remain anonymous thanks to their monster or demon garb, which they use in their videos and presentations. Contrary to what they represent, Lordi won the 2006 Eurovision Contest with the song, “Hard Rock Hallelujah.”

The costumes and masks are made by Tomi Putaansuu (the lead singer) and his wife. Appearing in these outfits and keeping their identity covered is an embedded matter in popular culture. In fact, when a media outlet in Finland published a picture of Putaansuu revealing his real appearance, the public wasn’t happy, and a website started working toward boycotting the magazine. 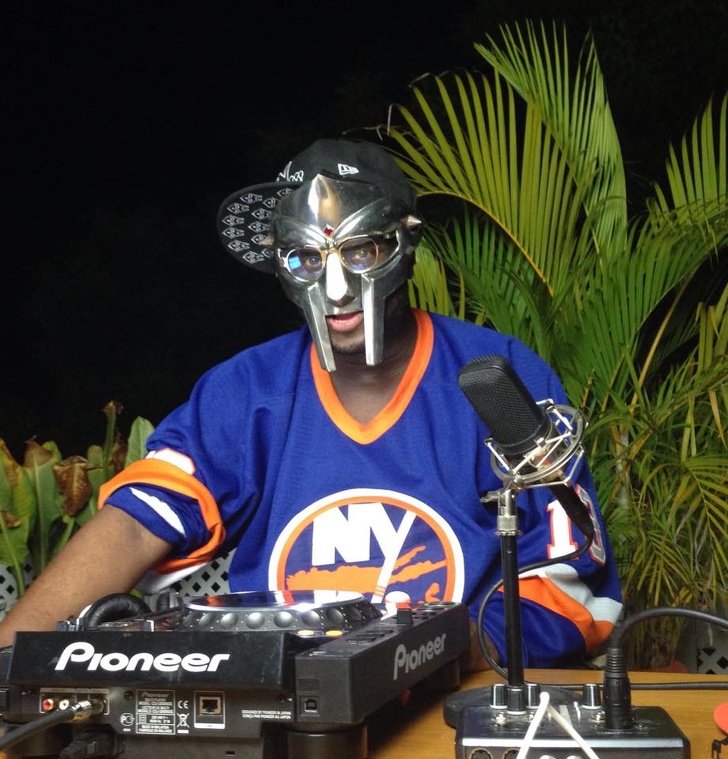 Daniel Dumile is the American rapper and music producer behind MF Doom. The artist was about to debut in 1989 with his brother (they formed a group) but unfortunately, he died in a car accident. Daniel left the stage, fell into a deep depression and became homeless.

When he recovered from all that pain, he began rapping again, this time wearing a mask similar to the one Russell Crowe wears in Gladiator. Other sources have pointed out that the mask has more of a resemblance to that of Doctor Doom of The Fantastic Four.

This German DJ is considered to be one of the best techno performers of today. He appears on stage wearing a clown mask. When asked why he wears this, he said he wanted to stand out and have a different stamp from the rest of his colleagues. His motivation? The Brazilian Carnival, the country where he bought his first mask and first presented himself as a professional at his own show.

Headlining ultra tonight! Pretty excited and nervous at the same time. Can’t wait to see you all 🕺🏻

Christopher Comstock is the person behind the mask of a marshmallow, better known in the music industry as Marshmello. It seems that Skrillex, another celebrated DJ, accidentally revealed his identity when he let his name slip during an interview.

However, the artist has never confirmed or denied this piece of information, which has helped him remain anonymous and keep up the mystery which has been the secret to his popularity. His unique mask is inspired by other artists like Daft Punk. 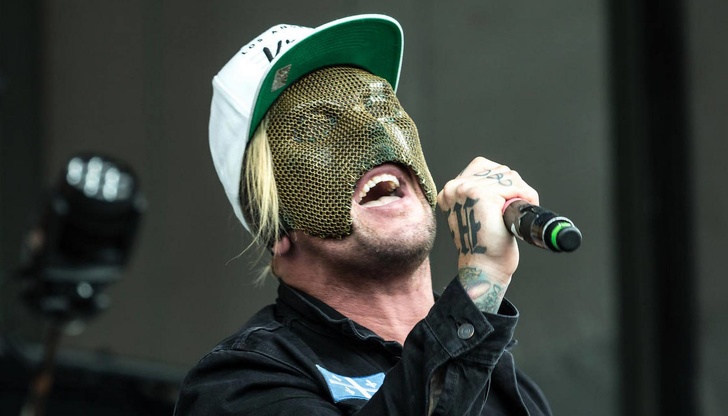 This American rap-rock band has the custom of using pseudonyms and putting on masks before every show. The types of masks change with the release of every new album and usually hold interesting meanings. For example, a character from the group named Funny Man honors Mexican wrestling with his masks, while Deuce wears a model that highlights his favorite colors.

Murdoc. He’s back. In the nick of time ⏱

The members of Gorillaz don’t even exist, they’re simply a virtual cartoon band. When they released their first album, the band achieved worldwide success but soon left many fans in dismay: everyone thought they were human. The real minds behind Gorillaz are Damon Albarn, lead singer from Blur and Jamie Hewlett, a cartoonist and designer.

Do you know of other singers or artists who prefer to keep their identity a secret? Share their names in the comments below!