Antiquity is associated with Socrates’ works and Alexander the Great’s conquests. And the Middle Ages were about witchhunts and the Age of Discovery. We can’t help but wonder how future generations will remember our modern time, the beginning of the 21st century.

Of course, we at The Elite Indian can’t guarantee that all these facts will be included in the new history books, but they sure have a great chance.

1. Development of computer technology in cinema 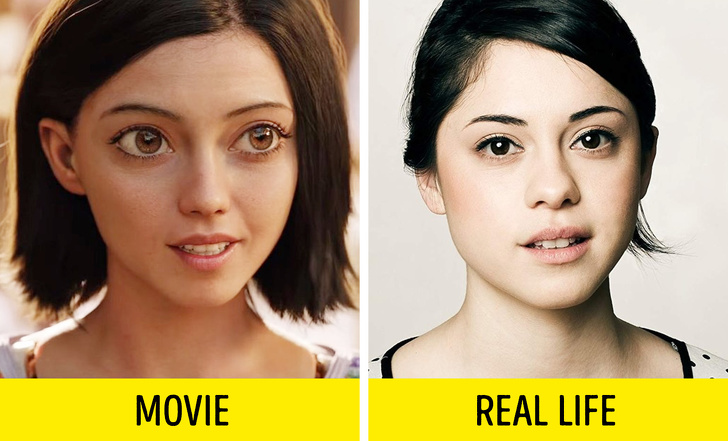 Nowadays, very few films are produced without the use of special effects. One of the most recent examples of this can bee seen in the main character of Alita: Battle Angel. The eyes of the cyborg girl look unnaturally big as if she was a manga character. In order to achieve this effect, the face of the actress, Rosa Salazar was shot with a special motion capture technology and the eyes were made bigger with the help of computer software.

Additionally, in the 21st century, not even death can stop you from having a movie career. Modern technology allows popular singers to appear in front of their fans as a hologram. This happened to Michael Jackson — he died in 2009 and 5 years later, he “sang” his hits in a show in Las Vegas. The 21st century is the golden age for freelancers and also for the people who don’t like being in the same place for a long time. Many IT-specialists prefer working remotely and blogging is a real business today.

Even college professors can give lectures online for foreign students who live in other cities. The Imperial College London is going even further with this: they’re going to have lectures taught by holograms of professors!

3. Holograms as a kind of art Art is also becoming more digitalized. Holographic ballet dancers appear on stages and in museums where we can see digital copies of them in exhibits.

Even auction houses use holograms. One of them showed the same object to people from London and from Hong Kong. As a result, a participant from Hong Kong bought a piece of art solely based on seeing it as a hologram.

4. The start of the era of tablet computers In 2002, Bill Gates presented the prototype of a tablet PC with voice recognition and the possibility to enter text using a touch screen. This was quite a successful attempt of Microsoft to adapt computers to fit the everyday needs of people who are used to taking notes during meetings and communicating via e-mail.

5. Digitization of knowledge accumulated over the course of human history The times where we had to wait in line to get a book from the library are long gone. Now, there are very few books, paintings, and scientific works that have not been digitalized yet. Anyone can get instant access to them at any time.

In 2008, the Еuropeana website emerged and contained all the digitalized paintings, archive sound recordings, photos, films, maps, books, and manuscripts from thousands of European museums, libraries, and archives. The users of this resource now have a chance to read the books from the British Library while lying on their couch and can look at the Mona Lisa without having to go to the Louvre. A virtual reality headset can take us to a different dimension in a matter of seconds. For example, we can travel into a video game where we can walk around and interact with the characters.

And this isn’t the only way to use the VR-technology. For 15 years, VR-simulators have been actively used in children’s rehabilitation. Augmented reality machines are used for children with cerebral palsy and other neurological disorders. This helps them to learn certain actions and stop being afraid of failure in the real world.

On November 5, 2018, NASA’s Voyager-2 went interstellar. It was launched in the summer of 1977 and now, it’s approximately 18 billion kilometers away from Earth. Its mission was to study the outer borders of the Solar System. The Voyager-1 had entered into deep space in previous years. Scientists think that they will be able to maintain their connection with the spaceships until the year 2027.

Now for the sad news: in August 2006, one planet left the Solar System. Scientists decided that the small mass known as Pluto could not be considered a planet.

8. From self-dissatisfaction to body positivity 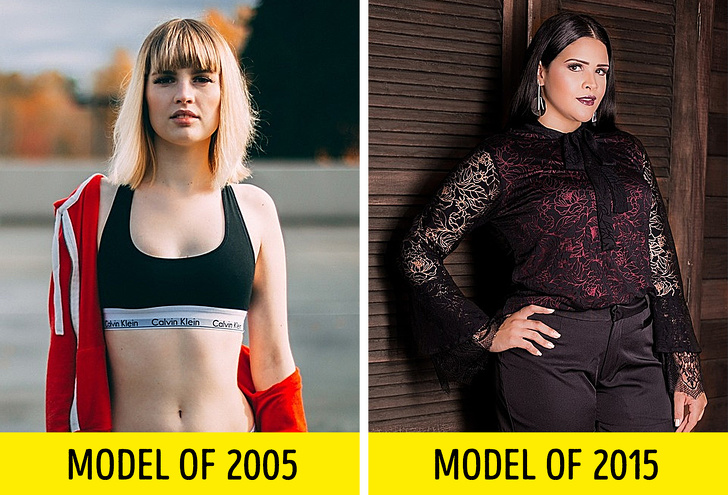 Psychologists say that the widespread presence of media has caused women to try to be physically perfect. They’ve literally been drowning in an endless stream of articles on how to lose weight, scary stories about obesity, and photos of slim models in trendy clothes.

As a result, the never-ending race to be slim has gotten kind of old and now we have a new movement upon us: body positivity. Women are no longer ashamed of their bodies and plus-size models have started to appear on the covers of fashion magazines.

9. Social media instead of real communication 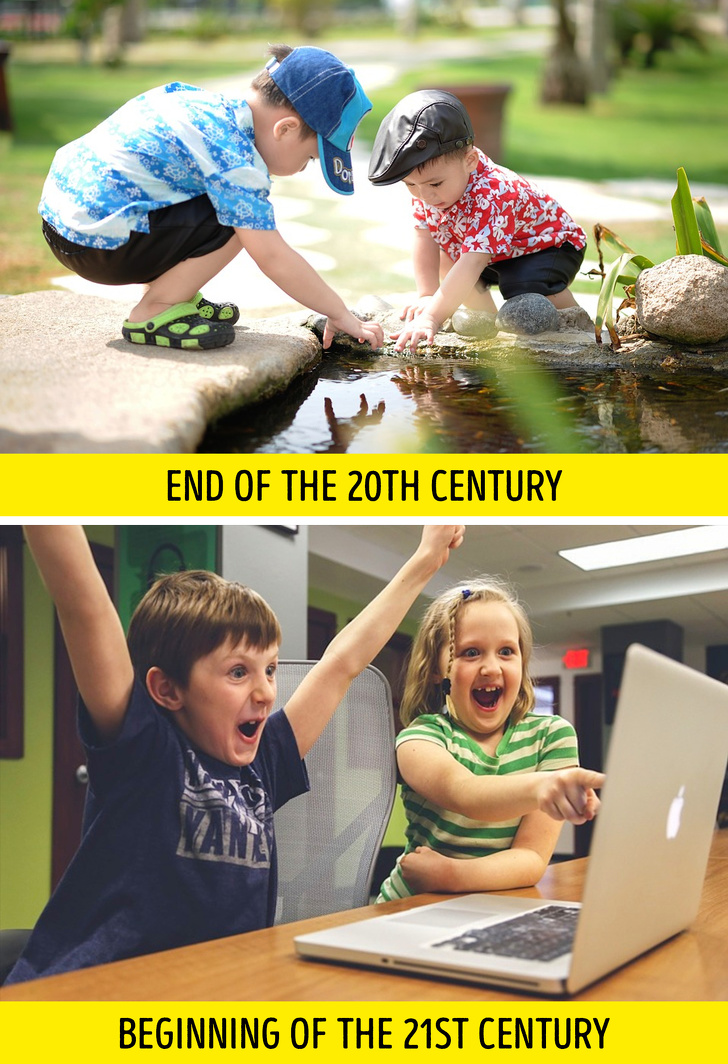 In 2004, American student Mark Zuckerberg created Facebook with his roommates and the rest was history. Now on social media, you can tell people all about yourself, find new friends, read the news, earn money, post commercials, collect money and do a wide range of different things.

Today, there are millions of users on social media from around the world. Scientists are even concerned that many of us have forgotten the importance of live communication. We spend a lot more time on our smartphones and computers than we ever have before.

10. The appearance of technology from sci-fi films Just a couple of decades ago, people would think you were crazy if you told them you could call them from anywhere at any time. But today, this is very ordinary. It didn’t take us long to learn to use smartphones and video chat, and quite soon, we’ll be able to speak to virtual projections (just like in Star Wars).

11. The appearance of biometric documents Regular paper documents are gradually becoming a thing of the past. Now you can get a biometric international passport with a microchip in it. It allows us to find out one’s identity in a matter of seconds, shortening the time we spend in airports.

It’s possible that the next step in this direction will be retina recognition. But now, scientists are dealing with some difficulties: it’s hard to make a good, high-resolution photo and few people are ready to put their eyes into special devices for the initial scan. 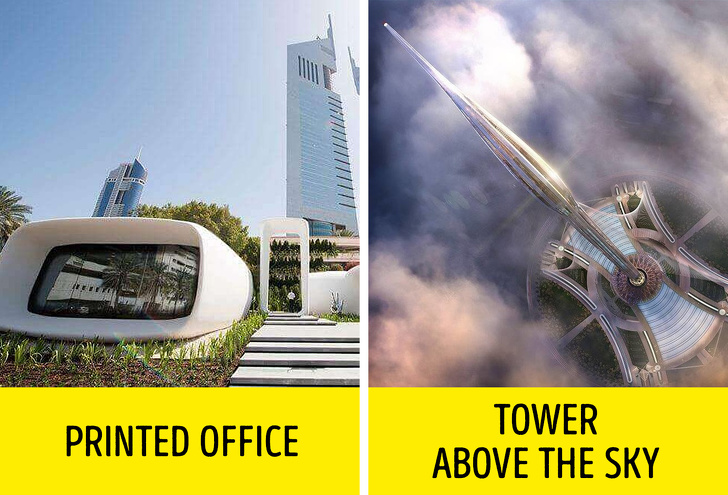 The pioneers in the area of unusual architecture of the 21st century are the architects that worked in Dubai. It was there in 2010 that they built the tallest building in the world, Burj Khalifa (2,717 ft), and very soon, they’re going to build something even taller and are finishing the construction of Dubai Creek Tower (2,717 ft).

There’s also an office of the future located in Dubai which will be the first every 3D building in the world! It took 17 days to build it along with one person, and a 6-meter printer. It took 2 days to combine the printed details and 3 months to complete the landscape design and renovation. In the US in 2001, the first artificial heart transplant surgery was done. The device called AbioCor allowed the patient to live for only 151 days with the new ear, however, the device is no longer being produced.

Today, experiments with printed organs seem to be a bit more promising. Not a very long time ago, Chinese scientists made new ears for 5 children (the pink thing in the picture above serves as the basis for the future hearing organ). They made a 3D-printed model in the lab and then built the cells of cartilage from a deformed ear. For 3 months, they were grown in a special solution before they were successfully implanted into young patients. Researchers claim that art at the start of the 21st century was more responsive to social problems. One of the brightest examples of this can be seen in the works of artist Nicole Dextras who decided to attract public attention to environmental problems. Her winter installations were made of ice letters and they didn’t last very long — they ended when spring came. This is Nicole’s way of reminding us about the fragility of nature.

It’s worth noting that people in the future will be shocked by the price of art pieces. And they’ll probably think back to 2013 when the work of British artist Francis Bacon, “Three Studies of Lucian Freud,” was sold at an auction for $142.4 million and became the most expensive piece of art in history. More and more modern women prefer to get married and have children after the age of 30 (or not have any relationships at all) and are not afraid of being single mothers.

What other facts about modern times deserve to be in textbooks of the future? Tell us down below!