When going on a trip, you can’t prepare for everything. Even if you carefully read all the forums and travel guides, it doesn’t mean you won’t get into some funny or awkward situations like, for example, when you want to pay for something but they don’t take cash, or when you wear a green Panama hat and people start laughing at you. They might also ask you some uncomfortable questions, such as “How often do you take a bath?” or “Do you eat too much?”

We at The Elite Indian decided to find out why these situations happen and reveal how to act when you’re visiting various Asian countries.

Touching food or money with your left hand in Asia 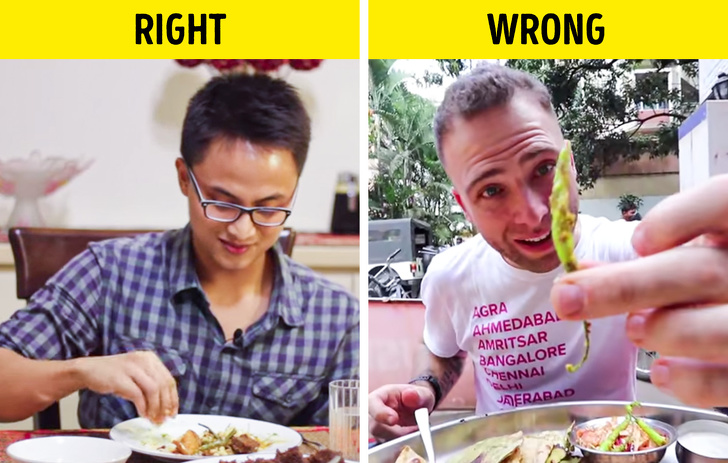 One day, I went to pay an Angkot (a van used like a bus that’s cheap public transport) with my left hand. He would not accept my money. I couldn’t figure out why, but he would not accept it and became irate to the point of yelling. He was an older gentleman with few teeth and a thick accent so I had a hard time making out what he was saying. Luckily for me, he had a passenger who knew a bit of English that piped up, saying, ’Bad hand, you use bad hand!’ I switch the money to my right hand, and he accepted it, begrudgingly. What I did was actually quite insulting and I felt terrible. From then on my left hand was glued to my side. © masmandiri / Reddit

In Israel, they don’t eat meat or dairy products from the same plate.

“I was sleeping over at my friend’s house, and I wanted to get a bowl of cereal. I told my friend, and he said, ’Okay, go for it.’ I got my bowl, ate, and returned to the festivities after putting the bowl in the sink like a civilized person. Everything was fine…until the morning when I heard a scream. It was his mother, and she was freaking out about the bowl. She saw the spoon in it and while putting two and two together, she realized that I had eaten cereal out of it. Apparently, these were special meat bowls, as they belonged to Orthodox Jews. No dairy can touch these bowls, lest their kosher-ness be compromised! She wanted me to bury the bowl.” © sipsyrup / Reddit

In Thailand, you have to be respectful of money because it has the king’s portrait on it. 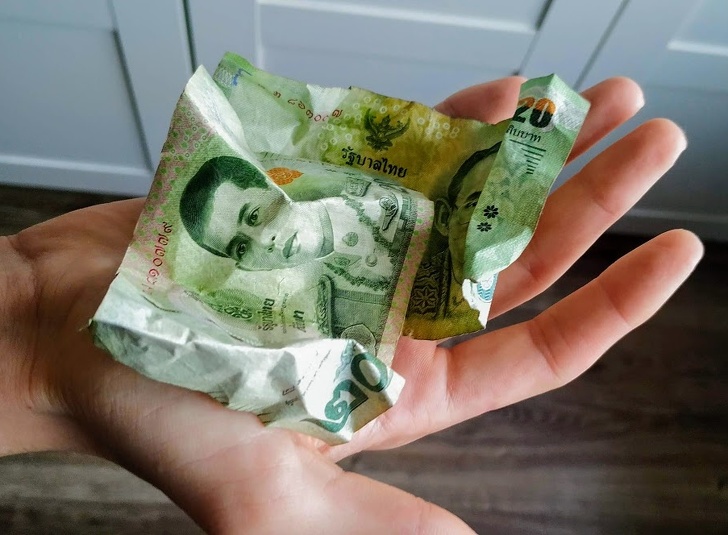 “I was in Chiang Mai, Thailand late at night at one of those little ’restaurants’ that exists under an overpass or something with some plastic chairs and stuff only when it was really late. I ordered a phad kaprow (stir-fried pork with basil on rice) from the old lady and ate it in silence. When it came time to pay, I didn’t have any money in my pockets. Luckily, for some reason, I thought I was in a dodgy area, so I had hidden some money in my shoe as a safety measure. So when the lady asked for my money and I took it out of my shoe, she absolutely flipped out at me, screaming. I couldn’t understand the problem until she grabbed the bill from me and pointed to the picture of the King on it and then pointed at my shoes. It was only then that I understood that since the feet are considered filthy in Thai culture, I had committed a terrible faux pas by putting an image of the sacred Thai king under my feet. I tried to explain there was American money in there too, so I had insulted the USA as well, but she wasn’t having any of it.” © loercase / Reddit

In Japan and China, people slurp when eating

“The only time my (Japanese) grandfather yelled at anyone was when my mother wasn’t slurping her soup because it was making my grandmother upset by not doing so. When she tried to explain that it’s rude in the western culture he roared back at her, ’WHEN IN ROME, DO AS ROMANS DO!’” © TheKidd / Reddit

Comments on one’s appearance and uncomfortable questions are not inappropriate in Asian countries. 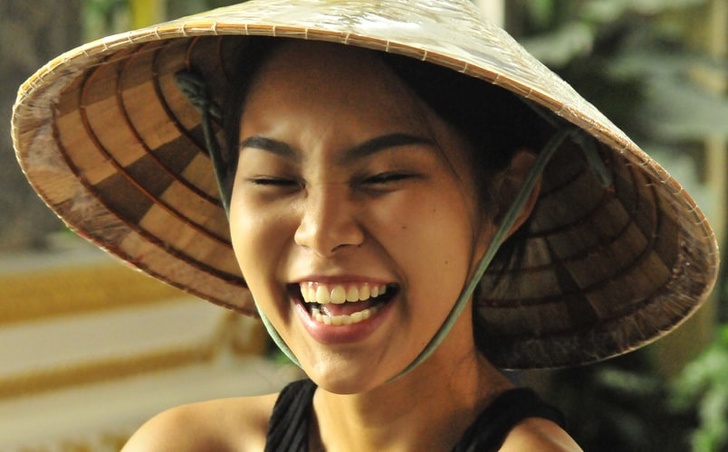 “I worked in Korea during my first year. Everyone had a Korean teacher they were paired with. One of the Korean teachers walked up to a slightly overweight, female new hire and said, ’Wow. You are very fat — how can you eat so much?’ She never figured out or was told that it’s a normal ice-breaker to comment on someone’s physical appearance.” © koreathrwaway2 / Reddit

“I worked in a lab in Thailand. Once, I came to work in a blue shirt with long sleeves. The professor told me that I looked great and everyone agreed with him. Later that day, he told me, ’You look much better today because you have long sleeves. You have very fat arms, so when you hide them you look more attractive and way slimmer.’” © Charissa Enget / Quora “This is what I look like and I’m the Thai definition of overweight.”

In Thailand, I went to the same laundromat many times and once, the woman that took the clothes asked me how many times a day I took a shower. I thought I misheard her and I asked her to repeat. She repeated the question. I thought it was her pronunciation, so I mumbled something and left. And then, I asked a guy I knew what it was all about. He explained that in Thailand (especially in the rural area), people can ask others about their financial situation. So, if a person can have a shower several times a day, it means that they are wealthy.

Public toilets in India have “a limited set of functions.” Finding a toilet in India is a big challenge. Not all cafés have toilets, especially for women. In public places like zoos, parks, and fairs, toilets for visitors are just a section of the floor tilted at an angle. Many tourists didn’t know that and got into very awkward and unpleasant situations.

Giving a “thumbs-up” in the Middle East is an inappropriate gesture. 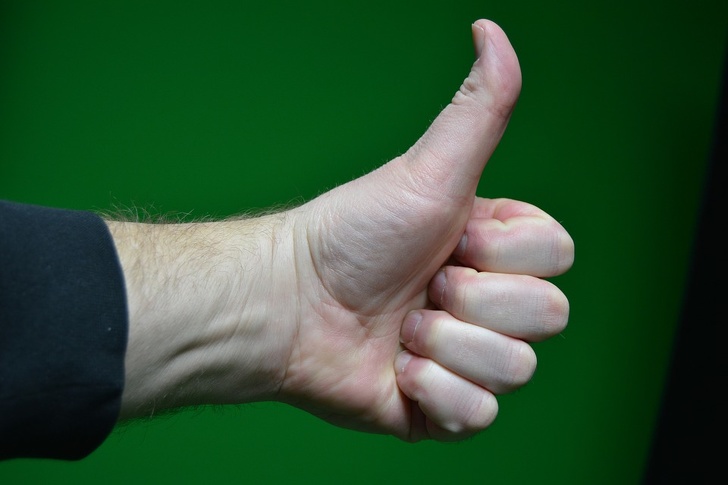 “I gave a thumbs-up sign to my friend’s Iranian dad — apparently it’s equivalent to giving him the finger.” © awesomerthanu / Reddit

In China, it’s better not to wear green hats. It’s believed that only men whose wives cheat on them wear green hats. The people wearing green hats will be laughed at even if they’re from a different country and even is it’s St. Patrick’s Day!

In Japan, only homeless people eat outside. 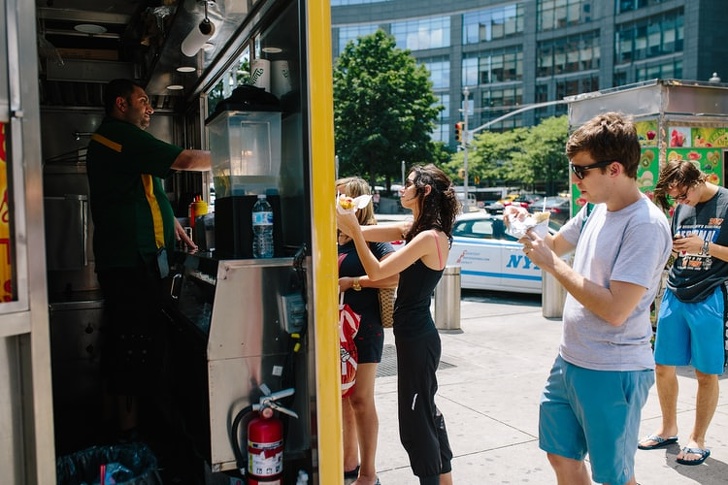 “In the early ’90s, I was visiting Japan briefly for business. I decided to get an early train to my office so I’d be on time. I grabbed takeout breakfast at the train station and, as it was a gorgeous day, I decided to eat it on some steps. The next thing I knew, someone grabbed me by the elbow and practically yanked me to my feet. I turned and saw it was the manager who was my main contact there. He dragged me, almost literally, inside, and explained that only homeless and uncouth people ate on the street like that. It was clear I had embarrassed him by my conduct.” © Curtis Jackson / Quora

Don’t try to ask someone to come over to you with your finger in Asia.

In the Philippines and some other countries, this gesture is used only to lure dogs.

In Thailand, they wave their wrist to ask someone to come closer.

“Once, I was at 7-Eleven and I couldn’t find milk. I asked the assistant. She left the register and went to the farthest corner in the store. I followed her but she waved her hand at me. I stopped and she says, ’Come, come!’ I take a few more steps and she waves her hand again. I saw that she was near a shelf with dairy products smiling and pointing at milk. This was when I realized that this gesture means ’come here’ but in Thailand, it has the opposite meaning.”

In many countries of South-East Asia, they eat areca nut that dyes the lips, gums, and tongue bright red. “My husband and I were in Sri Lanka. We rented a nice house not far from the beach and made friends with the owner. Once, we met him outside and saw that his lips were covered in blood. We asked him what happened, but he said it was okay and left quickly. The next day, we went to the market and saw that many street vendors chewed something and their lips and gums turned red. Later, we found out that it was from the areca nut which is a very harmful nut that’s chewed in Asia in lieu of tobacco.”

People in Myanmar wear powder on their faces that looks like chalk. 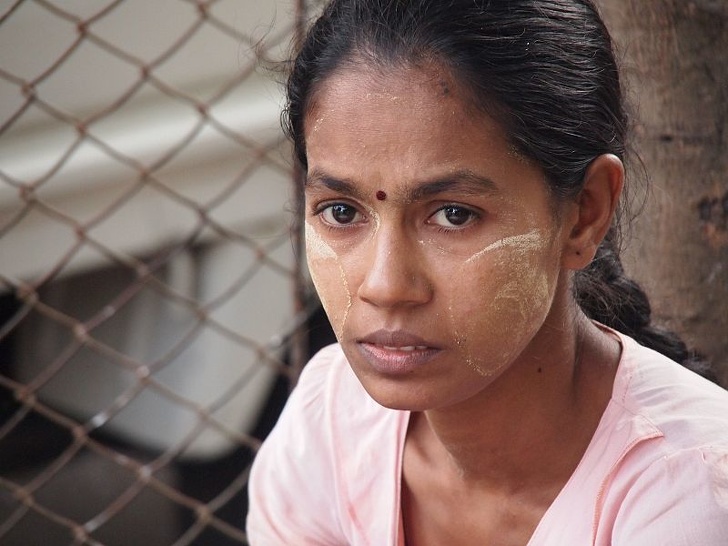 “I lived in a hotel in Yangon and once saw a funny scene in the lobby. An elderly couple from Germany was waiting and they saw a girl in reception. She had the special Thanaka paste on her face. The local people wear on it every day — these are considered a beauty standard in Myanmar and it also prevents being jinxed. The German lady comes over to the girl and says, ’Dear, I think there is something on your face, do you want a wet wipe?’

We believe that learning new things about other cultures is one of the most interesting aspects of traveling. However, sometimes it may feel impossible to avoid such awkward situations. Have you ever had something like this happen to you? Tell us about it!