Irritation is the feeling that people in big cities have almost every day. Slow-walking pedestrians, people cracking their joints, other passengers on public transport that try to look at your phone — any of these things can cause us to get annoyed in a matter of seconds.

We at The Elite Indian have read a lot of studies on what makes people angry. We’ve found that the people who test our nerves have their own reasons for behaving this way and it doesn’t always happen on purpose. By the way, in 50% of cases, the problem is with us, not with the people around us. 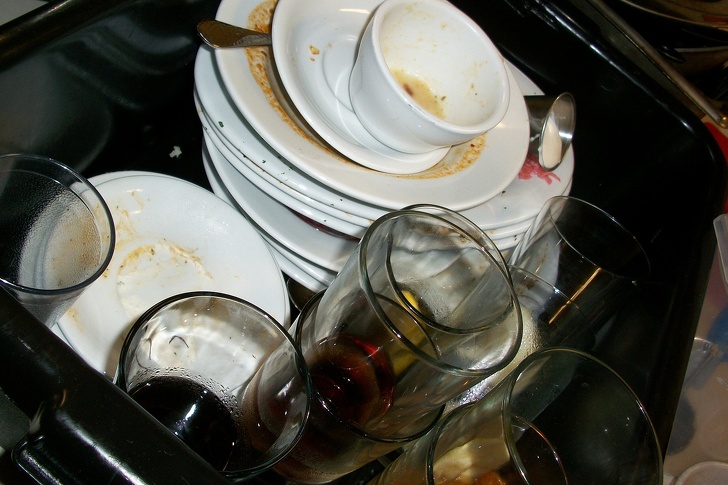 Nobody likes doing dishes. Dan Carlson, an assistant professor of family and consumer studies at the University of Utah, says that doing the dishes, unlike some other household chores, like cooking or gardening, is not rewarding. This is why people are not very enthusiastic about doing it. They sometimes even try to do different things to avoid washing dishes — for example, they leave a piece of food in the pan to give themselves an excuse.

But there is also a different explanation, especially if doing dishes is the only problem. The thing is, after we eat food, especially meat, chicken, cheese, and eggs, the body produces serotonin that tells the brain it is time to take a nap.

2. Spending a lot of money for show Don’t criticize the people that always want to leave more tip than is necessary to demonstrate their financial wealth. They might have some serious psychological problems.

Showing off may be a defense mechanism for deep-seated fears. The people that love demonstrating (or even imitating) their superiority, probably lacked their parents’ attention and care in their childhood.

3. Talking on the phone loudly in public places Today, it is believed to be bad manners to answer a call when you are surrounded by other people. You are essentially making them listen to your conversation, even though they don’t want to.

For some reason, we hate other people’s phone conversations more than regular conversations. There is a theory that suggests that when we detect someone talking on the phone, our brain switches to the “dialogue mode” and tries to predict the next phrase. But because we don’t hear one half of the conversation, the regular pattern doesn’t work and we end up feeling uncomfortable.

And the people talking on the phone in public feel satisfaction because they are sharing their emotions with others and their bodies are producing dopamine, which is an important part of the body’s reward system.

The problem and the biggest irritation factor about voice messages is that they are very convenient for the one who sends them and often really inconvenient for the recipient. Sometimes, we have to listen to them several times to get all the information necessary.

There are situations where voice messages are more appropriate than texts, for example, when the tone matters. Also, don’t forget that the number of phone calls is rapidly declining every year. 25% of British people that own smartphones don’t use them to make calls. This is because millennials are afraid of phone calls.

5. Touching people while talking or getting too close to them 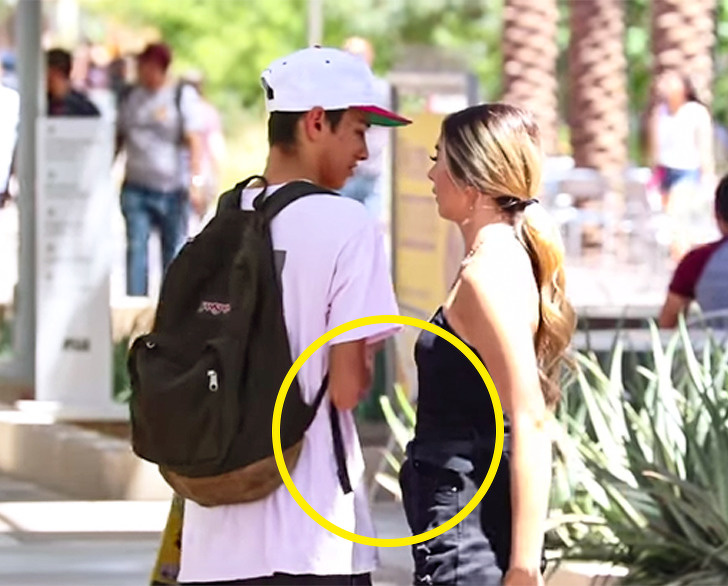 There are people that don’t know what “private space” is. They come way too close when talking to us, or worse, they even touch us. Caltech neuroscientists found that damage in the amygdala can be the reason why some people don’t feel the discomfort they cause when they violate someone’s private space.

Anthropologists that specialize in proxemics (the science that studies the interaction of people in space) claim that the size of private space is different for everyone and it is determined by many factors. But the reaction to someone who violates someone else’s private space is always negative.

If you are not sure whether your amygdala is healthy, just remember that in the western world, the normal distance for communication with people you don’t know very well is from 3 to 6 feet.

6. Taking baggage from the shelves the moment after the plane lands 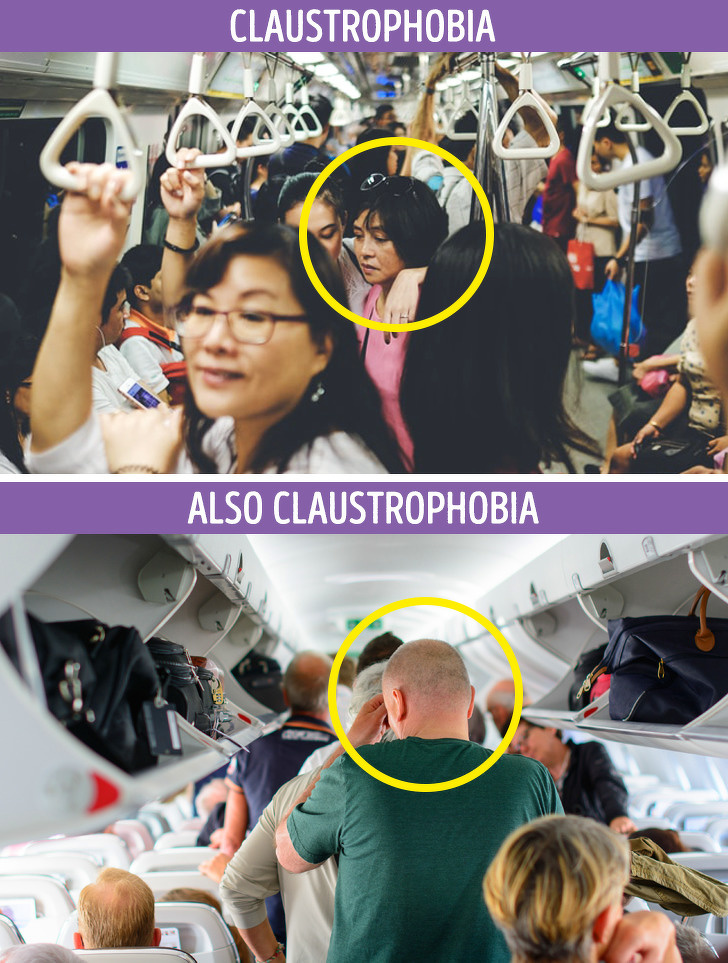 People that fly often have seen the passengers that get up from their seats just as soon as the plane touches the ground, even though they will still have to wait for their baggage in the baggage claim area.

There are several reasons why people may behave this way. First of all, most people hate lines. They feel that if they get up as soon as possible, they will leave as soon as possible. Second, it is a competition element — everyone is getting ready, why should I do nothing? And finally, even people who are not claustrophobic don’t like to be in a confined space.

7. Clicking a pen, tapping on the table, or playing with different objects People often do these things: they shake their legs, they tap their fingers on the table, they play with their pens, and they don’t even notice. These erratic actions are a popular trigger for many people.

But before you start yelling at this person and throwing away their pen, think about this: maybe, the person who is annoying you is doing this to relax. Fidgeting is a disorder where people do uncontrolled, repetitive actions, or play with small objects unconsciously.

One of the reasons for fidgeting is attention deficit, nervousness, and autism spectrum disorders. And if you are irritated by these harmless things, it is time to check and see if you have misophonia. There is even a term for this phenomenon — shoulder surfing. 97% of people have looked at someone’s phone. But very few people do this on purpose or with malicious intent.

Of course, it is not fun when someone reads your private messages, but you should know that most people, who peek at someone’s phone, are just bored. When you are on the subway, your brain knows that the most interesting object around is the smartphone screen and it is hard to resist the temptation.

Also, 80% of us use smartphones and tablets, so it may be really hard to find a spot where there is no screen. You can buy a special protective screen that makes it impossible to see your content from certain angles. Also, there are special apps that can darken the part of the screen you want to hide.

9. Walking too slowly in the subway or at the airport The irritation that people feel when they can’t go faster than those who walk very slowly also has a name — sidewalk rage.

Marc Wittmann, a psychologist at the Institute for Frontier Areas of Psychology and Mental Health in Freiburg, Germany, claims that this irritation is determined by our own ideas of how much time we should spend on our way somewhere, even if we are not in a hurry.

Also, people often think that slow walkers break the unwritten rules of walking, as if there is a defined speed for a normal walk. In reality, everyone travels at different speeds, depending on their physical conditions and the settings of their “internal timer.” So, next time you get angry with a slow walker, think about this: for Usain Bolt, you are the slowest walker. In the past, adults told children that they would get arthritis if they cracked their joints. But a recent study showed that this is something that is totally safe to do.

New York City-based physical therapist Scott Weiss said in an interview to The Thirty, that the desire to stretch our joints is just as natural as when you want to stretch in the morning or after a long workday. This way, the pressure in the joints decreases and you feel more relaxed. But maybe it is better to do it when you are alone.

11. Using too much perfume You have probably met these people on public transport or at work. It seems that they’ve used an entire bottle of perfume! And even a little bit too much perfume can cause a headache or even an allergic reaction in some people.

If you decide to criticize someone who uses too much perfume, be careful: scientists from Israel came to the conclusion that people use too much perfume when they are depressed. The thing is, the function of the smell receptors is suppressed when someone is in a depression and a person might have no idea that they smell like an entire perfume store.

Many things that other people do really drive us crazy, but the reasons why they do them are often harmless and they don’t mean to make us angry. Maybe there are things that we do that also make people mad. Have you ever thought about the motives of people that make others uncomfortable?