Hundreds of years after these famous works of art were created, experts have been trying to analyze the masterpieces but it’s been hard to figure out what details were planned and what things appeared by accident. All we’re left to do is enjoy looking at these masterpieces and sometimes note the things that can be considered mistakes, like asymmetric feet in Botticelli’s paintings or deviating eyes on the “David” sculpture.

The Elite Indian is going to tell you about the mysteries hidden in the works of the great masters of painting, architecture, and sculpture. The right arm in the “Portrait of Comtesse d’Haussonville” is distorted. It seems that the forearm is bigger than it should be — the elbow is located too far and the way the finger is bent isn’t natural. Additionally, we can see the model’s fingers that she keeps at her neck reflecting in the mirror even though the reflection shouldn’t be there.

The works of Jean Ingres vary drastically. Some of them are fascinatingly realistic while in others, the painter doesn’t keep the correct proportions. The naturalism in his works was called vulgar by critics and perhaps the violation of anatomy rules is actually the master’s protest.

Théodore Géricault’s “The 1821 Derby at Epsom” The second pic shows the work of Eadweard Muybridge, “The Horse in Motion.” The photographer proved that the horse’s run couldn’t be the same as how it was depicted on Géricault’s canvas.

The position of the horse’s legs in the painting, “The 1821 Derby at Epsom” otherwise known as “Horse Race” is wrong: both the front and back legs stretched to the opposite sides, giving the effect of levitating, not running, animals. The mistake in the painting was spotted by the photographer, Eadweard Muybridge 50 years after its creation. Yes, horses do take all 4 legs off the ground simultaneously but it looks different due to the specifics of anatomy and it lasts for less than a second.

Sandro Botticelli’s, “Primavera” and “The Birth of Venus” The works of Botticelli have some inaccuracies when it comes to feet and it relates both to the main and supporting figures in the paintings. Why it happened has remained a mystery but the paintings “Primavera” and “The Birth of Venus” both contain inaccurately painted feet, making it appear as if the painter had been in a hurry while creating this complex composition. Perhaps he was striving for an ideal and intentionally shifted from realism to decorativism. 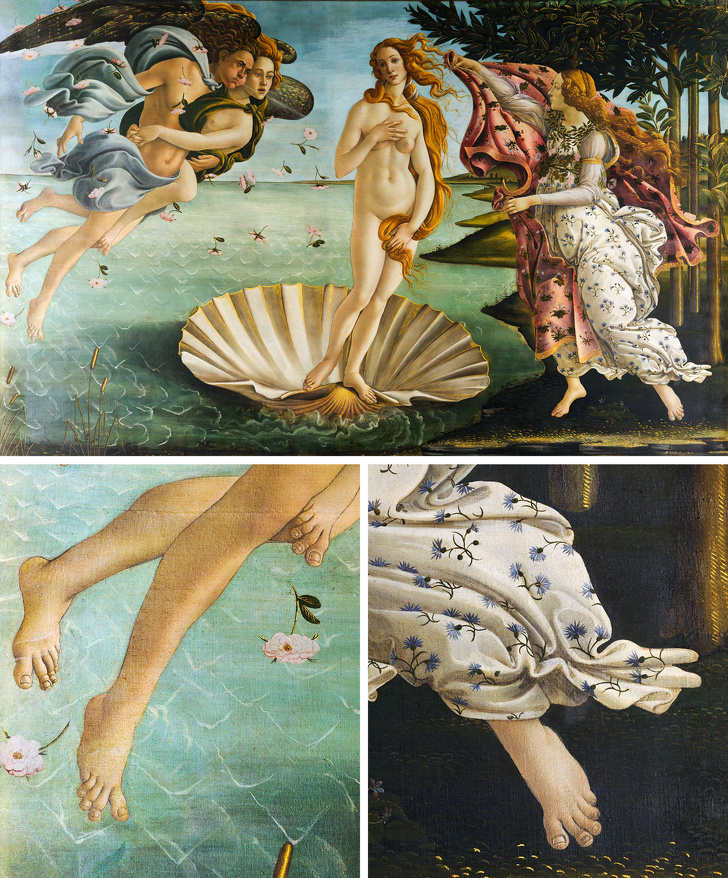 Sandro Botticelli’s “The Birth of Venus” 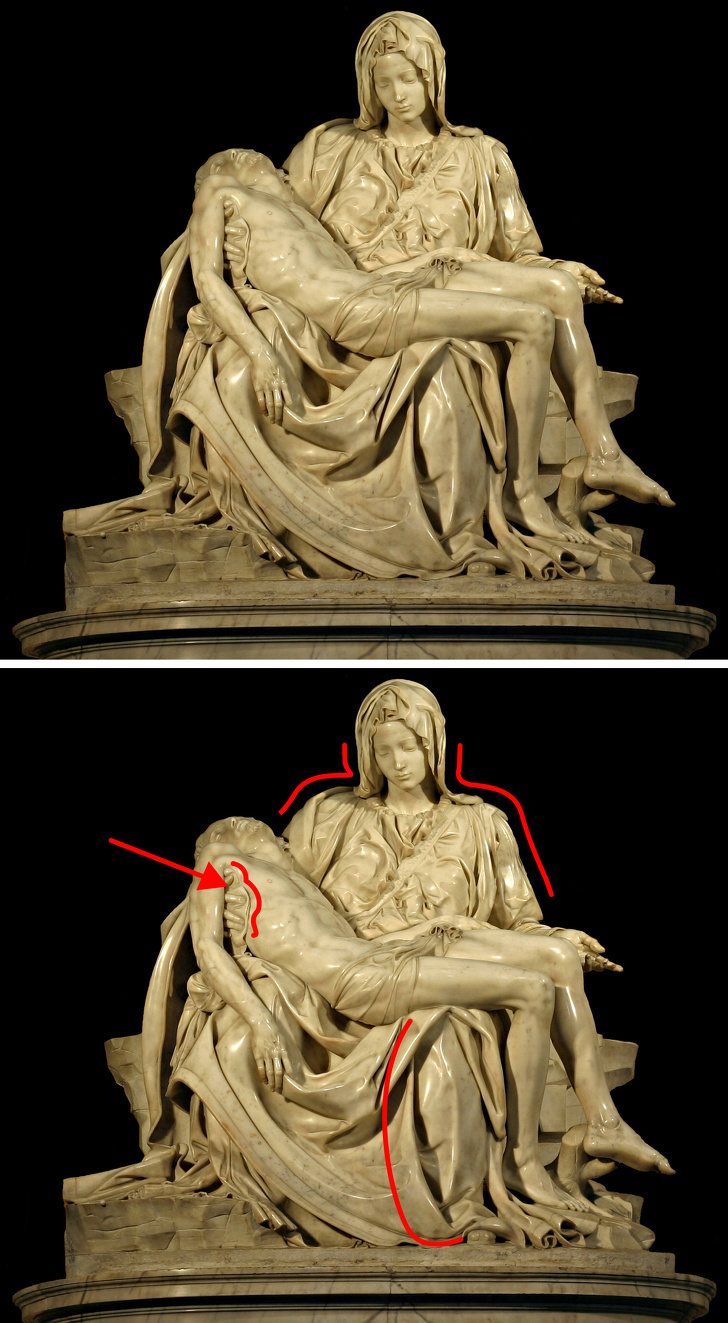 “The Pity” or “Pietà” is the only work that Michelangelo signed. The sculpture creates the mood of the situation it depicts and is so beautiful that people don’t notice its small inaccuracies. But pay attention to the body ratio of Mary and Jesus — her fragile body had to be “strengthened” by the huge amount of drapery in order to make the work look balanced. Her hands, legs, and shoulders look bigger than Christ’s. Canterbury Cathedral is the first Anglican church of Great Britain, a bright example of the Gothic architecture of the Middle Ages. But despite this, there are inaccuracies present in this church. In the photo above, you can see that the element of a triforium is asymmetric. Mantegna’s work has a visible distortion of proportions: Christ has a big head, long arms, and short legs. It’s believed that the painter had intentionally made the feet smaller. Thanks to this, attention is then focused on the chest.

Jan Gossaert’s (a.k.a. Jan Mabuse) “Portrait of a Merchant” and “Self Portrait” 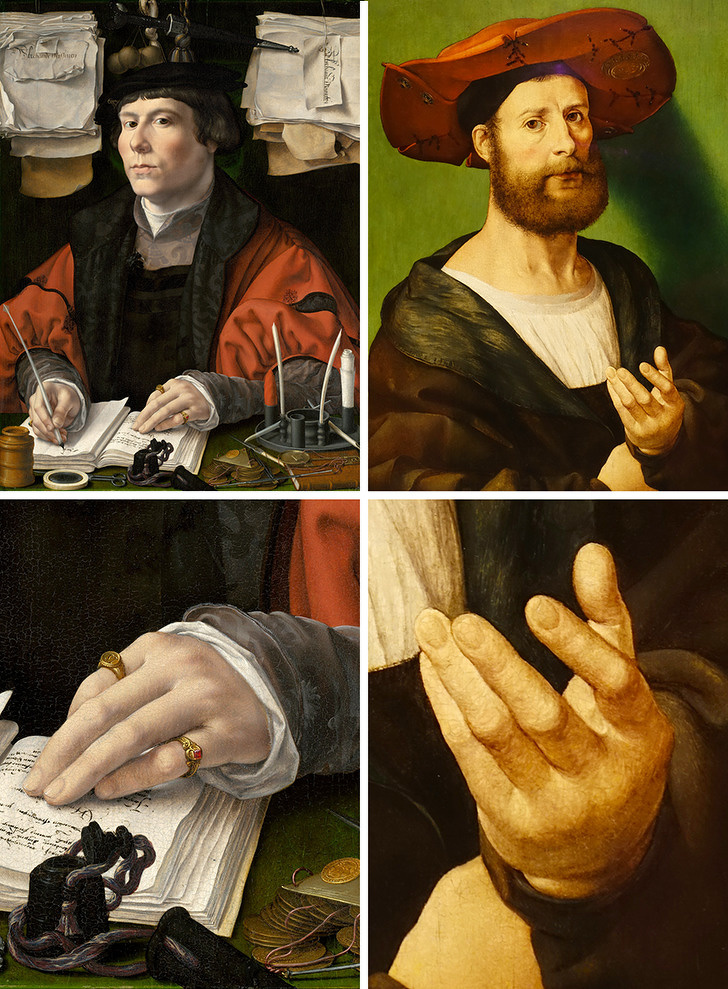 Some of Mabuse’s paintings show fingers that are too long, curved in an unusual way and the realistic style of the rest of the picture usually enhances the effect. It’s difficult to pose for a long time without moving which is why it’s no surprise that the details of the artist’s canvases would change during the working process, making mistakes unavoidable. 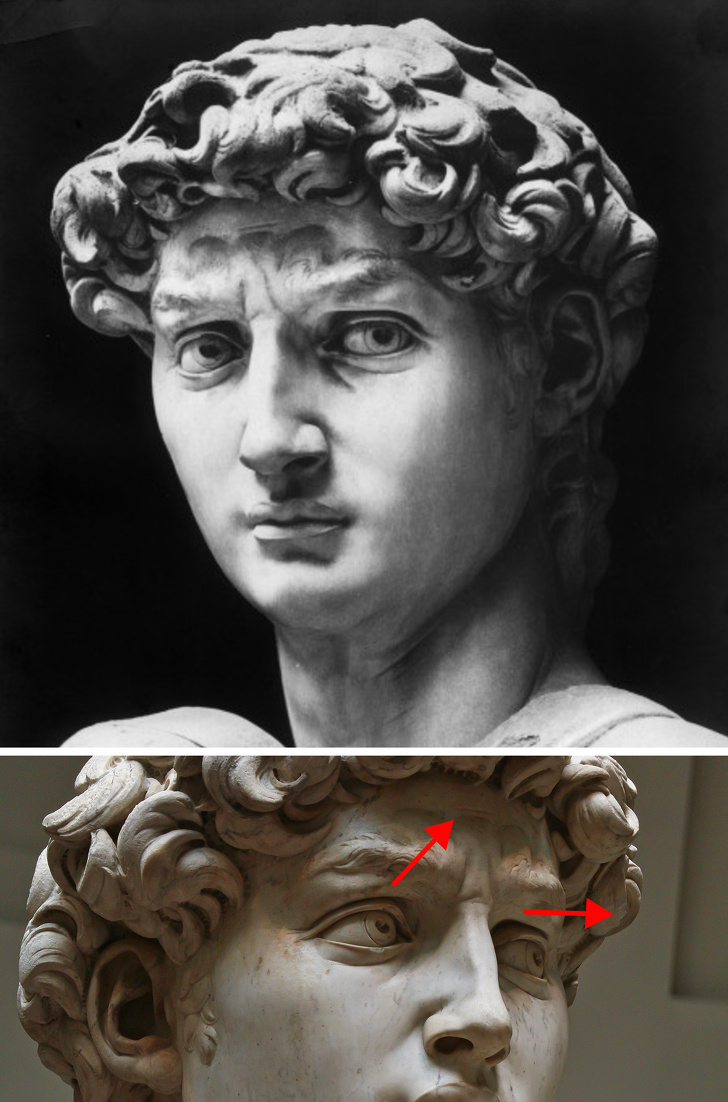 “David” has been considered the ideal of male beauty for 5 centuries. But if you look right into the statue’s eyes, you might notice that they’re deviating: the right one is looking a bit upward and the left eye is looking straight forward. We can object that such an outstanding sculptor as Michelangelo did it intentionally because from all other angles, the over 16-foot statue looks perfect. But as one researcher said, any ophthalmologist would hardly believe that David had won over Goliath with such eyesight.

Have you ever noticed these or other inaccuracies in world-famous masterpieces? What were they?