Just 10 years ago we were completely fine with simple phones and we wrote people real letters on paper. Nowadays, we have lots of apps, a digital wallet, and a camera on our smartphones. Nevertheless, scientists and engineers don’t stop working hard in order to surprise us with their latest inventions. Some of them are already a part of our everyday life, and some just exist as projects for the moment.

The Elite Indian collected 10 new smart gadgets that show how far new technologies have come. At the end of the article, there’s a special bonus for you – a real antigadget that can help you to save offline communication.

1. A cat toilet with a self-cleaning function The laziest (or the most progressive) cat owners have already bought the automatic cat toilets for their pets. The robot litter box knows how to drop the waste into an isolated compartment, and the owner only has to open it, and remove and throw away a full bag.

This “smart litter box” looks very futuristic. By the way, it’s pricey but probably worth it at $450. It is difficult to imagine individual sports and fitness practices in the 21st century without special gadgets. Hula hoop enthusiasts from the United States installed sensors onto this piece of sporting equipment and behold the VHOOP, a smart hoop.

The smart hula hoop has a movement sensor that tracks the intensity of your workout and sends the results to your smartphone. VHOOP has a workout mode and a competition mode with global ratings and a list of its best users. Recently, the British Condoms company released their newest invention, a “smart condom” called i.Con. It looks like a fitness bracelet but it’s meant for a different body part and it measures different activities. It can’t prevent pregnancy or the spread of disease but its creators are working on fixing that.

The sensors monitor the activity during a round of sexual intercourse — duration, intensity and speed of movement, the most popular positions and their frequency, the temperature of the organs, and the amount of calories burned. If the users would like, they can share their achievements with other users on the platform.

4. A suitcase that moves by itself

Especially for frequent travelers who can’t imagine their life without flying, the ForwardX company invented a special suitcase that can follow its owner.

In order to use it, you won’t need any joysticks or difficult commands. It’s connected to a smart bracelet and rolls independently beside its owner. There’s also a normal handle. The suitcase is not currently in mass production and the price for it hasn’t been announced yet. The Walmart company applied for a patent for creating robot bees, just like in one of the episodes of the “Black Mirror” TV series. The retailer actively supports environmental protection and “pollinator drones” would also work towards this initiative.

According to the engineers, the drones can perform all the functions of real bees except for making honey. However, who knows what they’ll come up with going forward? In the near future, it will help to save lots of plants and develop agriculture in different parts of the world. 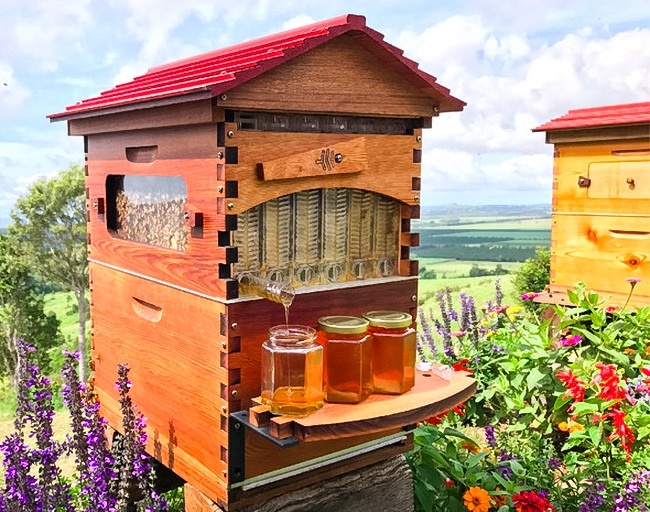 Several years ago, some businessmen from Australia took out a patent for a special beehive that is very easy to use. The modular beehive can be mounted like a birdhouse and lets you not only contain the bees but also allows you to extract the honey.

The project impressed the users of one crowdfunding platform, so much so, that they already achieved their goal and launched production. Now the entrepreneurs are using crowdfunding again in order to gain capital to launch a new upgraded model of the beehive.

7. A night light for a toilet Looking at some inventions, you may slap your head with your palm and say, “Why wasn’t it me who invented this?!” One of these inventions is IllumiBowl — a very simple lamp. It’s installed under the toilet rim and evenly lights all the space around it. Just imagine that you don’t need to turn on the light every time you go to the toilet. If you care about healthy eating and the environment around you, the pocket scanner LinkSquare is definitely made for you. This device helps to check everything around you – foods, liquids, and other materials.

It’s very convenient to use it in the kitchen, during shopping, or traveling. For example, it can tell you which product is more fresh. Technology never stops evolving and we hope that one day these will be installed in our smartphones.

9. An eye mask that helps you stop snoring

A Chinese company VVFLY has studied the problems of human sleep for a long time. The developers tried to create a gadget that would improve sleep quality and solve the problem of snoring.

According to the producer, thanks to the special vibrations, their smart eye mask helps to normalize breathing and get rid of snoring. There’s a reason to believe them: their creation is not just a prototype anymore. It’s now being mass produced.

10. A mask that your conversations secret This device, named Hushme, looks strange but it serves a very important purpose: it keeps everything you say a secret. This device helps you talk over the phone anywhere, without disturbing anyone around you. It’s very useful but the way it looks might need a little work.

And, yes, Hushme can imitate the voice of Darth Vader. A couple of years ago Graham Dugoni was at a music festival. He was surprised by the behavior of some people: they made videos of their tipsy colleagues and put them online thinking it would be funny. It was then that Dugoni started thinking about how much we respect someone’s confidentiality and what it means nowadays. With this in mind he began his startup called Yondr.

Dugoni’s theory is that everyone can do without their smartphone for a few hours. For example, when they’re at a concert, while talking with friends, or when they’re at school. The company produces special phone cases that are locked with a magnet and can’t be unlocked without an administrator.

Before school, the kids put their phones into special cases and unlock them after their classes. This unique idea has had a lot of positive feedback, especially at schools in the United States.

Which idea surprised you most of all? Which gadget would you like to have for yourself? Share your opinion with us in the comments.